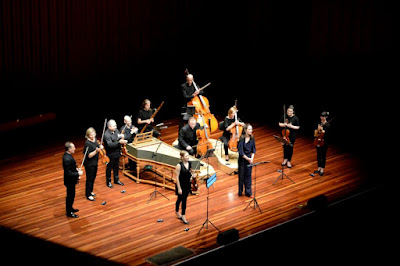 They can't be the first to have done it, but it was an interesting combination of musics.  This was ACO (Australian Chamber Orchestra) performing various works from or influenced by the Dach dynasty.  I knew JSB had a string of kids but I didn't know of his third cousin (Johann Ludwig) or his great uncle (Heinrich).  But ACO presented them, plus some influenced by the influencer/s, Schumann and Mozart and Sofia Bubaidulina.  And not just instrumentals and fugues, but there was a mezzo soprano, Anna Dowsley, for  a ciaconne and arias.  There was a third aria but not presented here in Canberra, and Heinrich was on the program but I don't think we heard him.  Not too sure.   The program had a string of shorter works so a little confusing although varied but we did also get a few longer things, especially JS Concerto for two violins in Dmin BWV1043 (which I know as I did a midi take for a The Pots album) and Cello concerto Amaj Wq172.  The interplay of violins was attractive, trying to identify which Strad was which (a game at ACO concerts given their classy instruments collection) and some blistering cello lines in Timo-Veikko's part.  As always, classy and showy, well presented and well received.  Our genuine Aussie internationals.  I was wondering about the tuning and strings.  The bass bow was obviously pointy baroque.  The others looked pretty standard classical, but I guess they were too, and I guess that also means gut.  Eric Heldyard was called in, too, playing harpsichord but also a very period-sounding keyboard in the Andante movement of Mozart Piano concerto no.12 Amaj K414.  It could get a little lost in such a big space, but it made you listen.  As always, nicely done by a fairly reduced ACO (2xvln1, 2xvln2, 2xvla, 2xclo, bass, harpsichord/fortepiano, bassoon, mezzo soprano).  I may sound dismissive, but these guys are good and always provide a great performance and strange how we just come to expect it.  That's the way with the best, I guess, on a big stage pretty far away.

Australian Chamber Orchestra played played music of the Bach family and some admirers at Llewellyn.