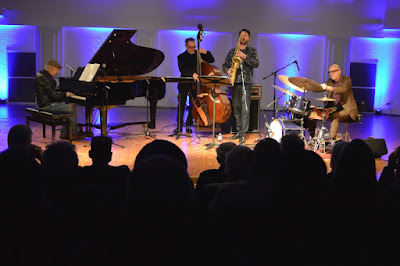 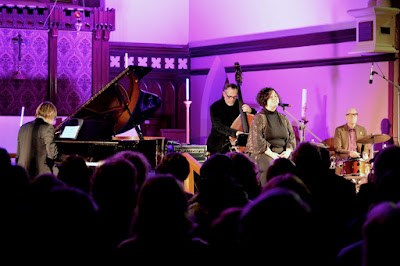 Then some of the senior masters, This World.  Mike Nock, Julien Wilson, Jonathon Zwartz, Hamish Stuart: need I say more?  I'd missed them in Canberra and this was a key reason to attend OWJF.  Not disappointed.  This was glorious playing and hugely understated.  Jonathon floored me at times, seemingly pretty simple, then devastating, quick, expressive, always beautifullly toned.  So too with Julien, easy going and humourous and a powerhouse of casually stated blazing lines that tell stories and lay down phrases and melodies that just feel sweet and totally nice.  That's a great skill.  nothing strained, just right, but at the same time blazingly quick, that is, if needed.  What I particularly interested me was their self-description as a composers' collective, so all provided tunes  which were perused for performance.  Even Hamish, drums, with something that flowed beautifully with a simple melody and expressive rhythms and some unexpected longer bars.  Or Jonathon's dedication to Mike called Winter that started with a breathtaking bass solo (mmm, Jullien commented on someone starting their own tune with their own solo...but Julien was joshing).  But overally, this was all immense earthiness, sincerity, maturity and plain chops.  Fabulous.  Just one other comment is on my mind from Julien.  He was thinking all and the festival and made the comment "Lots of churches in orange ... not many pubs".  It came back to haunt me later that night.  I hope I don't end up missing one band by waking by the pub they were playing in!

For me, festivals have been an opportunity to play or a chance to survey respected, invited participants.  This is turning out to be a survey of the Sydney jazz field, I guess, perhaps with some ring-ins and hopefully an occasional bluesy/rootsy/folky performer who I should know.  I was amused to hear the expression "jazz coma" on a YouTube video to describe that all-embracing commitment to the intellectual and artistic heights which is jazz.  But it can also limit horizons so now I enjoy seeing people with projects that spread over styles.

So I went to Mahalia Barnes.  I know the connection to Jimmy, great singer and honost and outspoken person that he is.  And I have another connection there, too.  Not that anyone knows of it it but me.  So what to expect?  I actually walked in with Hamish Stuart and Jonathan Zwartz.  Mahalia was playing with just piano and apparently they'd offered ot drop in for a rhythm section.  Amusingly, I heard vocals/piano while they were setting up, then a full band.  You'd die for such a band.  For that matter, you'd die for some R7B/Soul/gospel as Mahalia belts out.  Belt can be the word, but that's alsp the role.  Great personality, talking to the audience, getting singalongs on I am woman.  Song favourites from Aretha Franklin, Rene Geyer and others.  She recounted a story of Rene Geyer before she sand her glorious Heading in the right direction.  What an album that was!  The church probably had its greatest attendance in yonks and they walked out singing to themselves.  Not jazz but that gospel exhuberance; fabulous.