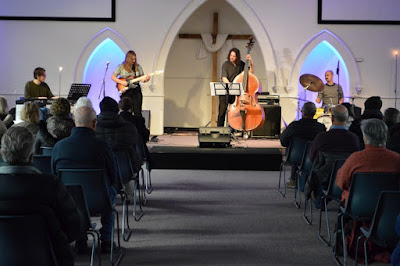 It's the premiere OWJF (Orange Winter Jazz Festival and I'm there, not for day 1, the more sparse Friday, but for Saturday and Sunday.  This is also the weekend of the Merimbula JF I rememebr, Queens Birthday weekend - the clash surprises me as there aren't so many JFs - but there are only so many long weekends.  Strangely the Monday is being left empty.  The chance is there for future events.  And it's colder than I remember Merimbula, from a cold spell and presumably from a country town far from the sea.  Colder than Canberra!   Happily, the weekend was relatively free for me and there were a string of bands which I'd sadly missed in Canberra so I'm here.  Orange is a 3.5 hours drive from Canberra, past the fish museum.

I arrive in time for a rerun of Hilary Geddes Quartet.  The tunes were as I'd heard a week before at the Street, similarly intriguing and well played, if not so intimate given the space.  I had another go at counting one tune and decided on 7 but it also went into 8s and 6s then I got lost.  Col Hoorweg commented he avoided the counting.  Sensible!  But again some intriguing playing.  I missed a real piano this time, but bass sounded great and max laid some nice solos.  The acoustics didn't suit drums quite as well as the previous gig, but again Alex is a star of sharp, incisive and somewhat sparse playing and I love this.  And we for another of Hilary's blaring rocky solos that again I love and I think i understood the song of late sleeper next to highway better this time.  So a satisfying start.  Interestingly, I will hear Hilary in many guises during the day.  She is seriously versatile.  If antyhing, that may be a theme of this festival, seeing several basses with extensions, a classical implement not used in jazz and not used here.

Then to Phil Slater's Dark Pattern.  Dark Pattern was the work not the grouping.  Truly incisive and deep playing but dark it was.  This is, of course, one of the senior and renowned collections of musos here this weekend.  These are not the young tykes making names, but the seasoned and experienced performers.  Revered. and they easily deserved it.  I thought Miles from before the jazz rock, all thoughtful and sparse and gorgeously beautifully toned trumpet with careful harmonies and multiphonics from Matt Keagan beside him and Brett Hirst and Matt McMahon and Simon barker, all renowned for seriousness and virtuosity.  It raised a theme in my mind about mature players, what they do in later years.  It was to be with me with The World and The catholics later.  This was a concert of glorious tone, continuous playing (the tunes ran into each other, attacca), chart reading, thought and depth and satisfaction but, I thought, not too much joy.  And so be it.  Maybe just telling the story of our times...