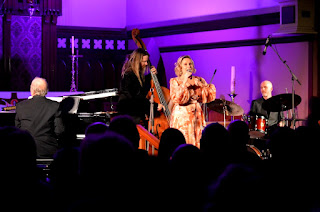 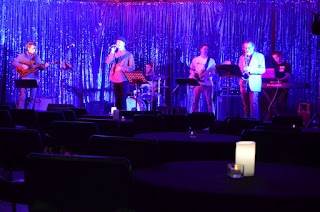 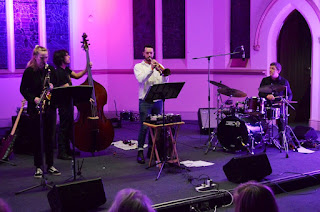 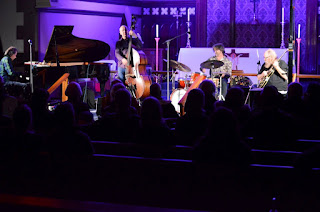 Emma Pask was a big name in the big room, the Holy Trinity Church.  Nice singing of standards and musical theatre songs, Here there and everywhere, They say it's wonderful and the like.  Classy and popular, if not so much for a more adventurous audience.  No names of accompanists in the program, but she played with piano, Phil Stack (bass) and drums.

Then some locals for this Canberran, the ANU School of Music Recording Ensemble.  Before its "restructure", the School once had a Commercial Ensemble, a Recording Ensemble and a Big Band and they played for the public regularly.  Miro ran the Recording Ensemble.  Members would write material then perform it.  The approach is the same but with John Mackey as leader/director.  This was a hot band, perhaps too hot and racing at times, too excitable, but seriously impressive playing and complex interesting tunes.  Apparently they will be recording and touring in future.  I was impressed.  Again no names in the program but working with John Mackey.

Then another quick visit to the Vampires.  I was wondering if they were that much more confident than the previous night.  I missed the start and couldn't tell, but again, I love these tunes and these grooves.

Then another big name, again in the unbalanced Holy Trinity Church, was Asteroid Ecosystem.  Now this was interesting.  They had visited Canberra and I'd missed them so they were one  reason for attendance at this festival.  It's an odd combination and apparently one that came out of a recording.  Ed Kuepper was the lead guitarist of The Saints and other post-punk and grunge groups; not jazz.  Alister explained that he'd recorded a string of albums with guests, the Alister Spence trio was one and thus this band.  Well, what was it?  A strange mix of improv set to charts and eclectic guitaristic tones and various noise and grooves and bass lines.  I didn't think the venue's acoustics did it justice and after how many bands in two days I wasn't up to it.  But there were some seriously good players here.