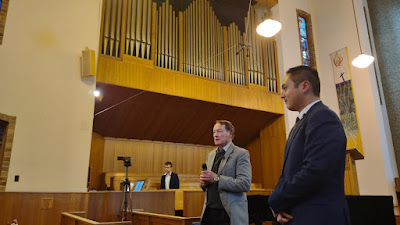 I was expecting one Bach and got another, a Prelude and fugue instead of a Toccata in fugue, both Dmin.  But Bach is always OK and this was one the Wesley organ with a visitor from Albury (I have connections locally) and diplomas from London and this was my nice little Organ recital series from the RSCM (Royal Society of Church Music (ACT Branch) tht takes me around the various organs in Canberra and the program with satisfying if not with the expected Bach.  So I remained perfectly happy.  Satisfying but very obscure: Dandrieu, Darke, Vierne, Bedad, Peeters, Twist and Widor.  I recognised a few names, but only a few.  Nonetheless, the playing was very capable and the music was another apt outing for an afternoon recital.  Much enjoyed.