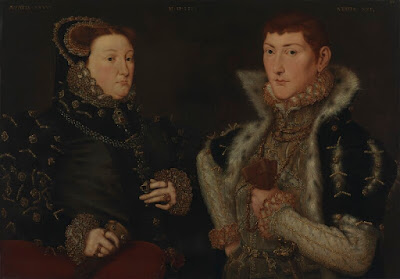 Yeah, they were at our National Portrait Gallery but they were from the NPG in London.  Covid has been an excuse to close a string of galleries in London and we've got access to some of their treasures.  Some are names unknown to me, but not many.  Britain is not my background but it is in our national cultural history, Henry VIII and Q Eliz and Q Vic and the rest.  Some were much more relevant to us, although others were somewhat colonial in connection.  I had to ask Megan about a few princes and the like, not knowing my royal history too well.  Of course we got Shakespeare and Newton and Banks, all worthy.  And Churchill, of course, but Conrad Hall and Arthur Wellesley and Thomas Howard?  Excuse my ignorance.  I was interested to see visages of Henry James and Dickens and William Morris and the Bronte sisters and even Beatrix Potter.  I enjoyed the small but life-like statue of Tim Berners-Lee and Karl Friedrich Abel was a renowned viola da gamba player painted by Gainsborough so he fits here.  I loved a few neo-classical pieces, of Anne Hyde and her royal lover and Mary Neville and her son, but I walked easily by some modern pieces, simple as they were, Anna Wintour and Joan Collins and Ed Sheeren and some others.  I was taken by some photos.  For over 150 years the photo has been the key record of people.  The pics of the Beatles and Mick Jagger were both at age 21 or so.  So young!  Mick looks worldly, but even after years in Hamburg, the Beatles really don't, and yet they would change the world in just a few years.  But perhaps the most stunning for me, of the whole exhibition, was Elizabeth Taylor, mature and gorgeous, aged ... 14-or-so.  I was floored as were those standing with us.  I guess the era of National Velvet?  Stunning.  So an interesting outing thanks to London and two NPGs.

Shakespeare to Winehouse was an exhibition of portraits from the National Portrait Gallery, London, displayed at the National Portrait Gallery, Canberra.  Check out the website at NPG London for the full collection and images.  I would have included pics of Liz Taylor, Beatles, Mick J, perhaps others, but I can't be bothered chasing up copyright releases.  Such are modern IP  rights.

Email ThisBlogThis!Share to TwitterShare to FacebookShare to Pinterest
Labels: portraits, Shakespeare to Winehouse