Both delicacy and rigour 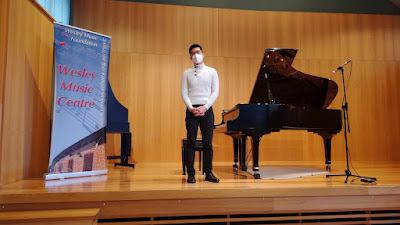 There's history in Aaron Chew's relationship to Wesley Music Centre.  He first played there at age 13 and he's well past that now.  In fact, he's just lodged his doctoral thesis on Bach-Busoni and we heard some of the relevant music at this concert.  Apparently Busoni was a famed virtuosic Italian pianist who took the music of Bach and performed it on modern piano, also arranging some works from violin to piano.  His Bach-Busoni Chromatic fantasia Dmin was one and he played this first.  I wasn't the only one floored by delicacy in phrasing and performance and intimacy in the most beautiful twists of melody and embellishments but that's not to say there wasn't power when it was called for.  Just lovely.  Then some Spanish tunes, Albeniz and Granados and  two Schubert impromptus.  He mentioned that he'd played one at Wesley before and I reckon I'd heard it.  Then an encore that he said needed no introduction.  Well, I did, and I think it was a Chopin Prelude.  About half was played form memory.  So there was history and intellectual rigour here, and gloriously personal performance and some decent tunes to boot.  Inspirational.