Back from the brink

I remember a concert of great sadness and desperation about this time last year, when anger and the sense of loss over the Music School was at its greatest. Wednesday’s Friends Fundraiser in the Band Room was refreshing and joyous and a significant return to form. The School is smaller and its hopes and possibilities are presumably reduced, but it survives and music continues. The concert featured Liam Budge and Tate Sheridan in the first half and the ANU Jazz Collective in the second.


Tate remains a student, but this duo is essentially from an earlier era of the school, but what a duo! Liam is craft and depth and involvement and the essence of a jazz singer. Tate’s richly varied in his piano playing, spelling out all manner of styles with a panoply of technical improvisation but always a clear relevance to the song. He listens well and doesn’t interfere. I enjoy posts from Tate on Facebook with pics of Elton John and John Lennon. He’s got a broad range of influences which he colours with jazz conception and this is a strong combination. I was also taken by a repertoire reaching back into jazz history. It’s the American songbook, but it has early components, too. Softly and Body & soul and Beginning to see the light, but also supremely cute oldies Love is just around the corner and Honeysuckle rose. This is a deeply satisfying duo. 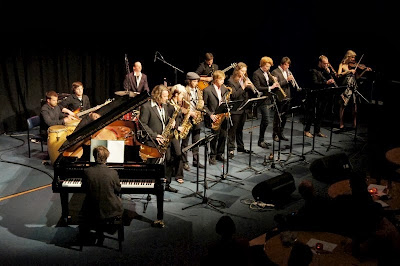 The second half was the Jazz Collective, a modern and challenging jazz orchestra led by Miro and John Mackey and playing scores by Miro, students and others. After the changes of last year, I was despairing of hearing such sounds again in Canberra. Small bands are one thing, but getting together a large ensemble like this is a big challenge, so I was profoundly happy to hear this satisfying playing in a decent sounding room. They played Miro’s take on Stolen moments, then Miro’s fabulous For Woody, then a ballad called Song for laughter, a blues, a transcription by trumpeter Scott Temby and a seemingly unplanned take on John’s burner, Pantano Drive. Good to revisit John’s outstanding solos, and investigate the solo chops of all the others in the band, especially the fresh names. The big harmonised parts are luxurious and colourful and that’s the strength of such a band. What a joy to hear that again. There’s life in the old school yet. The ANU Jazz Collective are Tate Sheridan (piano), Jack Ray (guitar), Llewellyn (El) Osborne (violin), Mitchell Brandman (bass), Jonathan Harding-Clark (drums), Simeon Staker (percussion), Pat Langdon (trombone), Eddie Bernasconi (trumpet), Scott Temby (trumpet), Hugo Lee (alto sax), Calum Builder (soprano sax), Andrej Thompson (alto, baritone sax), Miroslav Bukovsky (flugelhorn, trumpet), and John Mackey (tenor sax).
Posted by Eric Pozza at 7:39 pm