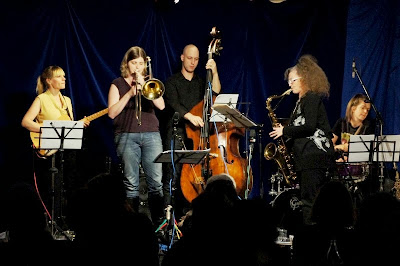 There was something amiss on stage when Sandy Evans' Sydney Women's Jazz Quintet played at the Gods: Jess wasn’t wearing black. Of course, there were numerous differences you could identify. I particularly noticed that bassist Karl had a clean shaven noggin. I only noticed that Karl was the one bloke in the band because of the band’s name. Apparently Zoe and Hannah couldn’t do it, so Karl filled the spot. It was nice to appreciate that women on a jazz stage no longer seemed a big deal. Just recently I noticed the imbalance of the sexes, but that was when the band was all blokes. It was different in the past. In the ‘70s, I remember being surprised to see a single woman instrumentalist on stage. We’ve clearly turned a corner (admittedly after 40 years), even if women still remain as singers and are instrumentally outnumbered. Julia would know that it will take a bit longer to reach the prime ministership.

But what of the gig? It was a lovely thing. Sandy is a monster saxist but also such an inviting host, so the vibe was both purposeful and friendly. Given our recent loss of Bernie McGann, this concert also a dedication. Geoff Page was Bernie’s biographer and introduced the gig with a poetry reading. Then we heard various McGann tunes amongst originals by Jess and Alex and Sandy. There was modern post-bop with complex heads, an interesting airy, harmonised arrangement with voice from Jess, plenty of worldly feels and an inevitable Monk tune. No surprise that Bernie liked Monk. I loved the grooves, especially Jess’ clean and choppy Tele chords and Karl’s vigourous bass. The time was rock solid. Several people mentioned how easy and steady were the feels. Alex’ solos were explicit in intent and melodic form; very nice. Sandy’s were clearly structured but more turgid, busy, passionate with some searing streams of, I guess, 16-th notes. Jodie blasted through with an incendiary solo at one stage which I hadn’t expected. Some tunes reminded me of Dave Holland with loping grooves and crisp piano-free accompaniment and the trombone/sax counterpoint. With three Jazz Rutherford award winners and Sandy and Karl, this was a serious and intelligent gig, but it was also earthy and entertaining.