What makes an activist 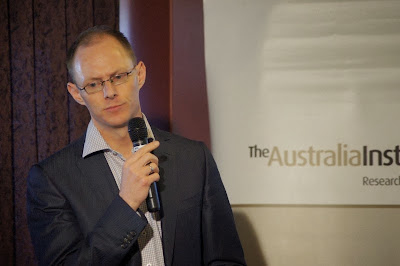 I felt David Ritter, CEO Greenpeace Australia, was an unassuming guy but with heart and rationality. I heard him when speaking to The Australia Institute’s Politics in the Pub. He introduced himself with the story of how he came to be involved in Greenpeace and activism. He’d followed issues in his youth but wasn’t particularly active. He’d worked as a commercial lawyer then moved to indigenous issues, but felt there were limitations on what the law could achieve. He’d gone to London and, despite an out-of-sorts interview, won a position at Greenpeace and was impressed by their approach to activism, that it can be both sophisticated and radical. He suggested one proof was David Cameron’s launch of an environmental policy at a Greenpeace warehouse. He went on to argue for material well-being as something to be grateful for, but noted the research finding that increasing happiness drops off past a moderate level of wealth. He spoke of power and argued that that politics is necessary, not to be avoided (“not enough [are] politically engaged in this country, as if it matters. And it does”), and that power in Australia is “unhelpfully concentrated” (retail, mining, media and more). He argued for having a vision. He suggested we sit quietly and conceive the big picture of what we are seeking, how to establish “general flourishing”. He cited Richard …’s suggestion that the right has established broad terms for its arguments, but the left is still split into single issue silos. His recurrent plea was for recognising the “whispering in our hearts”, meaning to identify and follow what really matters. He argues climate change is the ultimate concern and that this is not a partisan issue (at least ideologically: both conservatives and social democrats should be able to respond to it). Surprisingly for me, he retains an “iron conviction” that “we” will win, which is partly a personal influence and partly a recognition that without hope, all is lost. He commented on the media but was ultimately optimistic about new media (Conversation, Monthly, Crikey, etc). He was questioned on population, but argued that consumption is the “more significant variable”, mentioning marketing as an “unlimited propaganda for growth”. He’s an institutionalist, so recognises that clarifying and respecting roles is important. He argued for a depoliticised truth-telling-to-power public service recruiting the best and brightest, and clear roles and independence in decision making by politicians. He was questioned about Greenpeace’s lack of action on coal mining and responded that Greenpeace must prioritise, but that coal would be “one of the defining issues of climate change in coming years”. To me, he seemed mild for an activist, but also informed and reasoned and committed at heart and open to all paths to his vision. He’s not CEO for nothing (he was offered the position after 5 years of activism in the UK), so I guess that’s what a contemporary “sophisticated and radical” activist is like.
Posted by Eric Pozza at 8:15 pm