In their many shoes 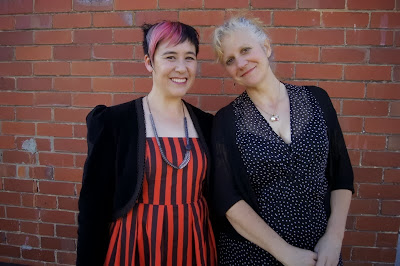 Sally Whitwell talks of keeping classical music friendly and she certainly did this at her concert at All Saints. That’s not to say there’s not considerable weight to the presentation. It was friendly and chatty but also political and social. Its title was In her shoes : music by women composers. Sally performed with Soprano Nadia Piave and Kompactus choir to present her own compositions and others by a range form Hildegard von Bingen through to contemporary women. These were mostly songs, often putting poems to music, so there was also a clearer message to much of the music (as against the abstraction of instrumental music). Not that I caught too many lyrics., of even concentrated on them. Classical sopranos are not so easy to understand and the best of times, despite their musical beauty and intensity.

Sally and Nadia started with an unexpected intro of stomping, clapping and singing the theme: “Before you judge a woman, walk a mile in her shoes. After that, who cares? She’s a mile away and you’ve got her shoes” / Bill Connolly freely adapted in the manner of Percy Grainer by Sally Whitwell. I’m still mulling over that one. It’s a strangely chosen intro, especially with the lost shoes, but intriguing and humourous. I was entranced from this start. Then some weirdly apt cowboy songs by Libby Larsen and some posme put to song by Sally. Christina Rosetti is a favourite poet of Sally’s and she reappeared through the concert. Then Cecile Chaminade, a composer of 1890s, Salon-era France, with a reference to her favourite sweets. Both Sally and Nadia informed us of composers and histories leavened with references to the cakes and afternoon tea which was to follow. You might see this as feminine, not at all in a demeaning way, but as inviting, nourishing, personal and life-sustaining, and with a touch of girls’ humour. For me, it’s a visit to a female world, but easy and inviting. [Strangely, at dinner that night, our middle aged female companions were joking of SWALK (and its MONA incarnation), something I know nothing of. SWALK = Sealed With A Loving Kiss. Apparently young girls, in the days of paper and stamps, would seal letters with heavily lipsticked lips, thus SWALK. New both to me and my son’s girlfiend, she of the email era.] Then an improvisation on Hildegard von Bingen and several piano solo pieces by Miriam Hyde, Cecile Chaminade and Lisa Cheney. Three of five songs by Margaret Sutherland, several more poems from Sally, and a strangely mythical story about women changing to seals, called Seal man, by Rebecca Clarke. I didn’t catch the full story but this was intriguing. Then an end with three tunes by Sally, performed with the Kompactus choir and the last including Nadia. I particularly enjoyed Miriam Hyde’s Forest stream, although it was one of the more traditional pieces. I liked the delicacy of the poetry although I seldom tried to fathom the words. I enjoyed Nadia’s strength of voice and theatrical presence and Sally’s capable but unpretentious accompaniment. I was impressed by the delicacy and precision of Kompactus and I was very satisfied by the range of compositions by the women presented. Women don’t have a large place in the repertoire, and I guess there are historical reasons for this, but they can no longerbe allowed to stand. These tunes and songs easily deserved this outing and more. Sally returns in a few weeks for the next Shoe session, this time with cello.

Sally Whitwell (piano, compositions) presented a program of compositions by women with Nadia Piave (soprano) and the Kompactus choir at All Saints.
Posted by Eric Pozza at 9:21 pm