Land of the Fair Go 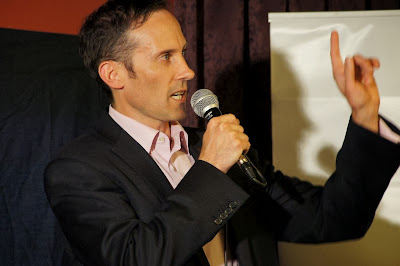 Andrew Leigh made good on his promise at a previous Politics in the Pub to return when he published his next book. The book is Battlers and billionaires : the story of inequality in Australia. Andrew is a Labor MP so is probably a bit freer now after Abbott’s success at the recent Federal election. He’s also been a Professor of Economics at ANU so I value his informed insights. He displays an obvious evidence-based approach and an awareness of where evidence ends and opinion starts and this appeals to me. It takes honesty to offer that your side of politics may find an issue difficult. He did that when talking of evidence around education, families and successful children (the success of stable families with “concerted cultivation”). Otherwise, his evidence was well supportive of his centre-left position. He described the level of inequality with a ladder metaphor that had Gina Rinehardt 10km up, above very many rungs. He provided a potted history of inequality in Australia. At first we were egalitarian when all had little, but then land grants and presumably other factors led to a high level of inequality by the 1820s/30s (think Dickens). The 1890s depression through to WW1 was another peak with mass unemployment and wages, but not prices, capped. Then the 1930s/40s saw increased egalitarianism with the growth of manufacturing and capping of both wages and prices leading to an increase in home and car ownership. It’s indicative rather than proof, but the pay of BHP’s CEO is an interesting measure of inequality. In WW1, an average worker required 50 years of income to match the CEO’s annual income; in the late 1940s, 15 years; now it’s 2 lifetimes! Inequality is even stretching within the BRW Rich list: the distribution of wealth is becoming more uneven even there. All this matters for various reasons: because we feel inequality matters; because Australia has an ethic of a Fair go; because inequality has impacts on health, social mobility and a the responsiveness and ability of society to change. He noted Australia’s spirit of egalitarianism in history and sport, but he also questioned whether the ethos is at risk. There were questions. He mentioned Daniel Moynihan on black society in America and Susan Mayer’s What money can’t buy. He mentioned the Henry review and dismissed an inheritance tax as a political impossibility in Australia and mentioned a progressive expenditure tax (I’d never hear of this one) which economists like but recognise it’s virtually impossible to implement. He observed that globalisation and technology combine to create superstars and concentration of wealth, but that they are unassailable; other policy responses are needed to deal with the outcomes here. He noted Keating’s comments on the ‘50s/’60s as “Australia’s salad days”, good days for social connectedness and egalitarianism. He responded to a question about charity beginning at home with a comment about few surveys being available: three cheers for the evidence-based commentator. He admitted some weakness by Labor on some issues (single parents, newstart), but highlighted other successes and pilloried some approaches expected from Abbott’s government. I was particularly taken by his description of Abbott’s Maternity Leave scheme as using transfers to benefit the wealthy. Tax reductions have served this way in the past, but not tax transfers. He worried about the influence of small parties and the Palmer party in the Senate, the loss of the mining tax and the regressive changes to tax and superannuation. He noted that governments can take the right or wrong direction, and commented that this was “strikingly inegalitarian”. He suggested that “inequality is a partisan notion” and that arguments from social mobility may more successfully convince voters. Again he was refreshing in questioning people in progressive politics, saying they are interested in (good) expenditure but less interested in finding the cash to cover it. He noted that median household expenditure is now ~$80K and that those above this level are richer than half of Australians. I’m pleased to hear this because I share Andrew’s political position, but also because it’s refreshing to hear someone who’s both informed and honest in arguing his position. We’d benefit from a lot more like Andrew Leigh.

Andrew Leigh spoke at the Australia Institute’s Politics in the Pub.
Posted by Eric Pozza at 1:54 pm