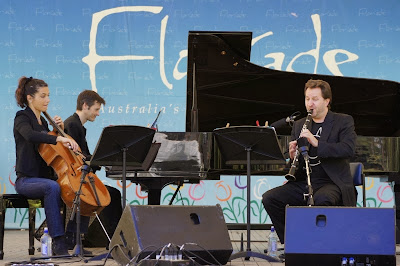 Two gigs, one day. First was Ensemble Liaison at Stage 88 for Floriade. This was the final concert of the ANU School of Music series at Floriade. Ensemble Liaison is a Melbourne-based trio of clarinet, piano and cello. I’d expected classical and I got classical chops but with an intriguing jazz-cum-classical-cum-world playlist.

They started with an arrangement by Percy Grainger of Gershwin’s Man I love. What a nice song is this, but I didn’t like the rhythmic feel in the melody. The eighth notes were stodgy dotted quavers that refused any swing. I guess it was Grainger’s take on this, because the outfit was nothing like this! Nothing, nothing. They moved on to another Percy Grainger, then Gershwin’s Concert fantasy on themes from Porgy and Bess and I was taken. This was real jazz feels and authentic emotions, every passing chord given its due, earthy effects with harmonics and slurs and clarinet tonguing. These were wonderful skills but more: a valid and satifying interpretation. It was their major piece and they’d recently recorded it, so they were on top of it, but this was impressive. Add Elena Katz-Chernin’s Russian rag, and any LNL listener will be won over. It’s so pretty and wistful. Then Scott Joplin’s Elite syncopations and some classics, the Swan on cello and piano and a Gershwin prelude on piano. Then Piazzola’s Oblivion and Libertango and some Klezma and some Irish folk arranged by Benjamin Britten, and an end with more Klezma. I was totally convinced after the Porgy & Bess and the rest was the metaphorical icing. The gig was on Stage 88 with a vast space in front and not much of an audience at that time, so this was an informal interaction. It was delayed, too, as Timothy rebooted his iPad. He was using a bluetooth pageturner and somehow it made another bluetooth connection. Embarassing but then paper charts have their own problems. The repertoire was popular but challenging, the ensemble looked the part and enjoyed themselves. So did I. I’d hoped for nothing so satisfying but I lucked out on this one. Ensemble Liaison is David Griffiths (clarinet), Svetlana Bogosavljevic (cello) and Timothy Young (piano).
Posted by Eric Pozza at 9:44 am