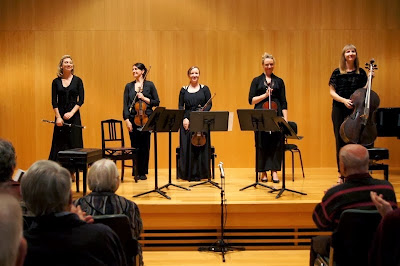 The Australian Haydn Ensemble returned to the Wesley Centre to play a night of music in the Galant style. That’s a new one on me, and not only for me. The music was introduced by Skye with a quote using the adjective “elegant” several times: elegant people, dress, presentation … even music. The core theme was the music of Johann Christian Bach, the London Bach, a son of JS Bach, a convert to Catholicism, a lover of the good life. He ran the first London concert series with Frederick Carl Abel. We heard a series of tunes from this series, including by JC Bach and Abel, but also by Haydn, Mozart (who had played on the knee of JC Bach when a precocious child) and one by JC’s dad, JS Bach. Galant is pre-classical, pre-delicious Mozart, certainly not God-fearing JS Bach, but it’s lovely, elegant music none-the-less. The AHE does it eminent justice. This concert had a fully female AHE, four strings and flute, all in black. Again, elegant and dignified. They are wonderful players, playing authentic instruments, some originals from the mid- to late-1700s. The sounds are not as powerful as modern instruments; the bows are lighter and have a different balance; the tones seem more settled with smoother edges, like old wines. Anthea’s cello was voluminous, especially on lower notes, and strangely lodged between her legs with no endpin. The two violins were notable for different tonalities and the flute was just a fine and pure tone amongst the strings. There’s considerable predictability in this music. The tempos were similar; the flourishes served the same courtly purpose. Dignity reigns; pleasure is consequential; presumably a good dancer is a celebrity. It’s not our world, or at least not mine, but it’s beautiful to visit and AHE does it worthy justice. A lovely evening of style and gallantry and elegance.