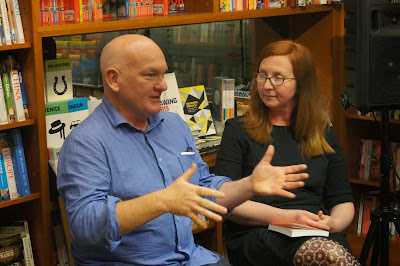 There was an amusing interplay between Jonathan Green and Katharine Murphy at the launch of Jonathan’s new book, The year my politics broke, at Paperchain bookshop. Jonathan’s book is pessimistic, although he recovered some sense of possibilities by the end of the discussion. Katharine is more positive, saying politics is cyclic so better times will come. I tended to the pessimistic tone but I was also somewhat in agreement when I read a recent article by Katharine which argued the more positive case. Jonathan described his work as not quite a campaign diary, more a personal account of the current state of Australian politics as evidenced by the 2013 Federal election. He spoke of a sense of disquiet and disengagement and a concern that serious issues abound that politics isn’t helping to resolve. He sees the craft of politics as being virtually perfected ( “now [it] games the system impeccably”), but this craft serves purposes other than what we need, so big issues, climate, budget and the rest, are not engaged. He was asked how he accounts for the carbon price in a minority government. He answered that it was was forced by the balance of power, by a party with a core belief, but that the government entered with a great downside and couldn’t recover. Being journalists, they got onto the role of the media. Politics and media are “very interrelated”; they passed by the argument “journalists as stenographers to power” and the Stockholm Syndrome; they mentioned some journalists as players in the Labor leadership travails; they considered on- and off-record comments and ethics and accountability, the roles of editors and subs and the diminishing age of journalists and associated lack of corporate and historical memory. I was amused when J mentioned “there’s a phone call in journalism that you don’t want to make because it kills the story”. There was talk of new media and change, and J seemed positive here. Both J&K questioned “truthiness”. J mentioned that we’ve passed the era of left/right numerical balances (let’s hope that doesn’t return) and scientific consensus can be assumed in broadcasting. K mentioned the new government “slowing down the news cycle” but said it “clearly can’t be sustained because they have to do something at some point” and “politics abhors a vacuum”. At one stage, someone suggested to J that “you sound optimistic”; K pointed at the book and joked “not in here”. I liked Jonathan’s prescription for repair (“sincerity, thoughtfulness and charisma”) and his view that whoever does it successfully will be rewarded with political success. We laughed at a comment about an MP who lost a seat for his/her “own brand of personal generosity”. There was a question on political staffers that observed that they take the tone of government and that pollies are adults (so can be independent of their minders). Also that legislation is hard and a “no loser” philosophy results from timidity and an attacking media. I jokingly asked if privatising the ABC was an ambit claim. Perhaps because they are journos (and J is at ABC RN), they responded seriously, essentially arguing that a review is possible but that the ABC has nothing to fear. I wasn’t so sure given the adage that you don’t call an inquiry unless you know the answer. I had other questions, too, that I would have loved to chat about. New media (eg, Conversation, Monthly, Crikey) is seen as a saviour, but is it a real replacement for the mainstream media or is it the educated talking to themselves? J&K talked of parties juggling for the centre, but isn’t there a real ideological difference that was just not discussed during the election? Politics may be cyclic and return to deal with real issues, but do we have time, eg, with Abbott dismantling carbon pricing while we’re committed to 2C temp rise and tending to more. We assume availability of information through new media and internet, but isn’t 1984 a premonition, given NSA revelations (and more) suggest great control is also possible, and maybe likely, by government? What’s our concept of history, when we can talk of share price as being “the highest for 3 weeks”, or our sense of value or worth when we speak unthinkingly of notional $billions lost in one day. Lots of ideas. Will the book confirm pessimism or leave open Katharine’s positivity? That’s a question for later.
Posted by Eric Pozza at 6:51 am