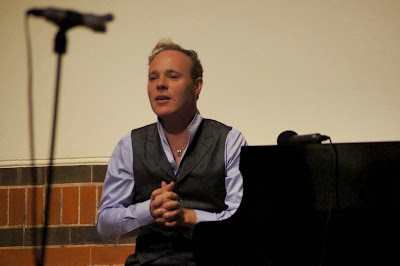 Jef Neve started with the Beatle’s Blackbird. It’s a beautiful song and much loved but it’s not jazz. Or at least so say the jazz police. Herbie Hancock didn’t say it with his album New standard, but by then he’d been well written off over synthesizers and jazz rock. I’m not sure there’s much life in this argument anymore. We were talking of crossing genres and Jeff was saying that the new generation doesn’t even recognise them. Pop and jazz and classics are all intermingled on their mp3 players. Strength to that! I’m even learning of Radiohead (not that I can always count it).

Jef didn’t play Radiohead, but Blackbird was joined by a quirky collection. The uber-standard Lush life and a few originals (When spring begins, on longing for warmth after a damp Belgian winter, and Endless d.c., on constructing a good life) and Joni Mitchell’s A case of you and Kandalini. Also Goose – they are an electro-pop outfit from Belgium, apparently. Jef had written out a piece based on one of their their auto-arpeggiated tunes. It’s much more challenging when played manually but Jef had chops. He was playing solo, but this was a full and busy sound. I thought of Gershwin for a few tunes, with bass lines and long arpeggiated accompaniment and attractive melodies. But perhaps also Ravel or Rachmaninov with rolling busyness and melody passing between the hands, or even Liszt when there was some very busy right hand work. Someone else mentioned Brad Meldau. I got touches of all this at times. But amongst the busyness, I was most impressed by the clarity of melody, how lines would appear in one hand or another, clear, ringing, then pass elsewhere. Jef has a classical background; he’s recorded film music; he’s recorded with classical and jazz instruments and just as a piano/vocal duo. His recordings seem an eclectic mix. He’s even written a few piano concerti and recorded with the Belgian Philharmonic. I shouldn’t be surprised that he’d promote an inclusive view of music. I listened with closed eyes and the screeds of notes just dissolved into texture and presence (this was loud for a solo piano) and melodic movement. Mostly consonant, although just some colour from symmetical scales or leading notes or hanging chromatics. Jef had told me of recording standards with NYC singer, José James, so I was interested in his encore with our local, Liam Budge, on Don’t stand a ghost of a chance with you. Liam had had a lesson in the afternoon and this invite resulted. We know Liam as a committed and able singer with a future. But what beautiful and unstrained accompaniment we got from Jef. Perfectly balanced and delicate and responsive. A lesson in comping.

This was loud and forceful and busy solo piano playing, but always clear in melody and virtuosic in performance. This is not Jef’s first visit to Australia, so we can expect him some more. Catch him at Wangaratta or 505 or when he returns. Jef Neve (piano) played solo at Cnaberra Grammar School. Liam Budge (vocals) sat in for an encore.