It was an afternoon of two different musics. Firstly, Tobias and Katie Cole and family at the High Court, singing religious song and modern. Then a Festival of Blues piano, with four of Canberra’s major blues pianists at the Brassey. How different! 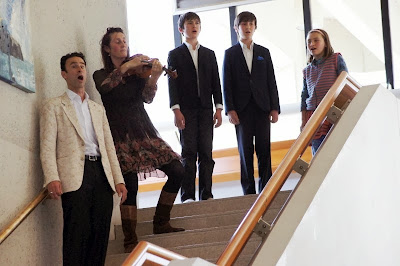 The Coles gig was pure music sung mostly in high voices: soprano and countertenor (Tobias’ baritone in one song changed the effects markedly) and childrens’voices, mostly unaccompanied, although there were some instruments. I was intrigued by a violin walking pizz accompaniment on one. And there was an excerpt from the Magic flute played on glockenspiel with four recorders. The introduction was Britten carols spread overhead in the big space of the High Court foyer. This led to some Purcell including Sound the trumpet. There were a final few songs in front of the audience, three Island songs from Australian composer Stephen Leek: Monkey and turtle, Trade wind and Morning tide. But the most fascinating was kept till last. Tobias had the audience stand and split into four groups, learn a song, and perform as a conducted canon. Lots of fun and more active than usual. I was surprised by the audience’s decent intonation and memory for a relatively complex song. Well done to all of us ... and to the Coles. 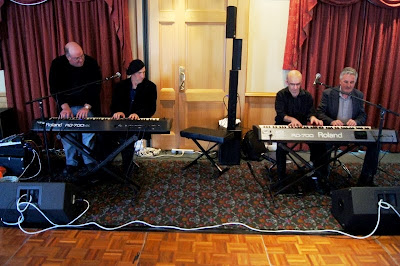 But then off to a darker space provided with beer and PA. Very different and more physical, at least for a few dancers. I just took a beer. Leo Joseph had organised a second Blues Piano festival, and this was it. Four great local pianists playing the blues: Wayne Kelly, John Black, Ross Buchanan and Leo himself. Now these are different stylists: Leo heavily into New Orleans, Dr John and the like; Ross all busy and virtuosic; John cool and capable from a lengthy professional career; Wayne authentically bluesy but letting in a touch of jazz chops. They mostly sang, too. I was particularly impressed by John’s calm and effective voice on tunes like Allelejuia I just love her so. Wayne sang Just a closer walk with thee with a strange key change for the vocals and with the heaviest, most authentic gospel piano. Fabulous. Ross wracked the piano with armfulls of notes, was it Billy Joel? Leo is just classy with his New Orleans presence, laid back groove, worthwhile lyrics, black and beret-arrayed. I was amused by John Black introducing a tune as “bulletproof”. Pianists need a few bulletproof tunes to play when requested at parties and such. As a bassist, I hadn’t considered this need. A few friends sat in – Juanita Cucinotta accompanying her singing with piano, and Lisa Pye – but it was really a day for the four, individually, in pairs, or even as a quartet avoiding stepping on each others’ toes, musically and literally as they swapped spots during songs. An amusing and bluesically worthwhile outing, the opportunity for a few beers and chatter and dancing, and they’ll be doing it again soon (Harmony German Club, 29 Nov, evening).