Thanks to our friends 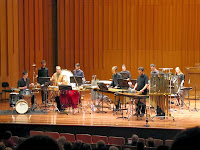 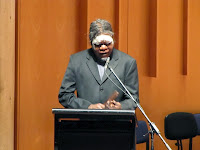 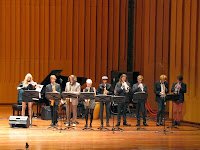 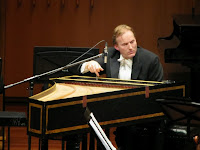 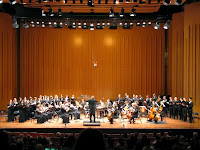 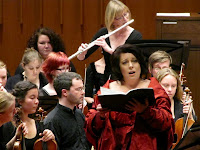 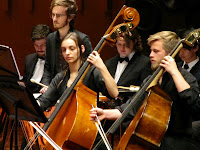 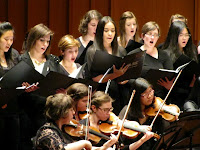 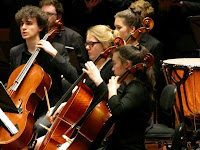 The ANU put on a big free show last year when it was under the hammer and they returned with another this year. The intention is different, presumably to showcase the continued existence and success of the School, but the context of massive change at the School is the same. Head of School, Peter Tregear, introduced this year’s concert as a gift to the Canberra Community and friends and he plans to make this an annual free gig. Great. The School of Music clearly has many supporters in Canberra. Many were horribly disappointed by changes last year, but Peter and others have been working valiantly to rebuild the School and they need the support of friends.

This was another mix of styles and ensembles, if not the extended potpourri of last year’s event. First was DRUMatix with soloist Sean Connaughton performing David Mancini’s Suite for solo drumset and percussion ensemble. How can you not love this? Infectious grooves, intervallic rubatos, rich tapestries of tone and even harmony and melody from the vibes and marimbas. And tubular bells, various latin percussions and timpanis. This was all convincingly performed, joyous and infusive, and Sean’s drum solo was interesting and of a nice length and surprisingly rocky in this classical percussion context, but that’s the nature of a group like this. DRUMatix presents a catholic array of sounds and rhythms. I’m sold. Then a welcome to country. Then the Jazz Ensemble playing an arrangement of Stolen Moments by Miro and Miro’s For Woody. These are two great tunes. Stolen moments was a surprise with a few added bars which stretch and settle this already cool tune. It was good to hear John’s tenor again and El’s violin (which is ever more satisfying) and guitar hidden in the back row. For Woody is a burner and the solos were shared widely: tenor and violin again, then trumpet, alto, drums, percussion. I don’t find Llewellyn is a generous acoustic for jazz, but this was enlivened and harmonically sweet in the heads. Nice.

The fine music followed the interval. The ANU Chamber Orchestra played and the ANU Chamber Choir sang under Peter Tregear’s baton. Calvin Bowman joined them for sinfonia and chorus from Bach’s Wir danken dir, Gott, BWV29. This is classic Bach oratorio material. Peter Tregear introduced it as written for the inauguration of the Leipzig Town hall and lamented our current alternatives. It didn’t seem hugely complex but it’s totally satisfying. I found strings and organ a bit unbalanced and the instrumentals somewhat lost in this large space, but it grew as the voices joined in. Bach is nothing but a pleasure. Then Handel’s Ode to Saint Cecilia’s Day, HWV76. Saint Cecilia is the patron saint of music, so this was also an ode to music. It was performed by Chamber Orchestra and Choir with singers Rachael Thoms (soprano) and Paul McMahon (tenor) and instrumentalists Rachel Beesley (orchestra leader), Virginia Taylor (flute) and Julia Janiszewski (cello). Handel combined text from Dryden with his dignified and sometimes majestic orchestration. This is a larger piece with numerous movements, variously dance-like, expectant, undemonstrative, joyous, stately, majestic, in three and four. Nicely done and especially involving at the end.

It’s been a very demanding year for the staff of the School of Music, even if it was quiet one in public. I’m hoping for a more publicly visible school over coming years. Ode to Music was performed by staff and students of the ANU School of Music. Performers were DRUMatix, ANU Jazz Ensemble, ANU Chamber Orchestra, ANU Chamber Choir, Calvin Bowman (organ), Rachael Thoms (soprano), Paul McMahon (tenor), Rachael Beesley (orchestra leader), Virginia Taylor (flute) and Julia Janiszewski (cello) led by Peter Tregear.
Posted by Eric Pozza at 5:49 pm