I asked Rose Holcombe what’s important to play accompaniment. Rose on piano was accompanying Julie on trumpet for some tunes and her sister Sarah on alto sax for another. Rose first said you need to listen; I expected you need to read well (lots of new charts). 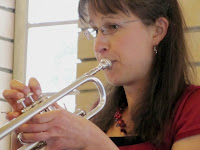 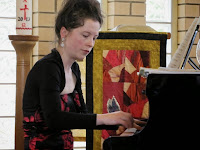 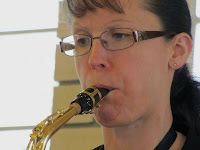 I commented that piano’s such a good instrument (it’s the master of all instruments, in my books: an orchestra in a box) and she replied that she’d like to play trumpet. Probably just a throwaway, but it amused me. It’s a case of the grass being greener on the other side. She had played some profound piano solos that had me melting: Rachmaninov’s Prelude in C# minor, Chopin’s Fantasie impromptu and Nocturne in Eb. Only on piano. But then the others had played some seriously interesting music. Julie led with a Barret (?) Fantasie and warmed into Alessandro Marcello Concerto in D minor. Then sister Sarah played Mozart Rondo in D. Then the piano solos and a final third movement of the Hummel Trumpet concerto in Eb. Nicely played and interesting with its long descending sequences and classical formality. Maybe I’m just going soft and being sucked into the romantics, but I found those piano tunes were lusty and emotionally involving. Rachmaninov with the big chords (Rose said the final page is so dense it’s written on four, not two, staves) and big dynamics (ppp > fff) and Chopin with his beautiful lyricism and rolling arpeggios and sheer exuberance. Whatever, this was a richly varied concert despite the short duration and there with memorable pieces and some impressive and touching playing.