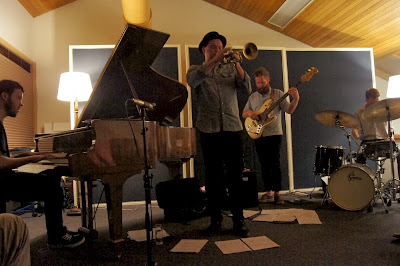 Lines of flight play music that I can’t bring my wife to. I joked about that with Keith. This is Nu Jazz. I use words for it like uncompromising, unyielding. Some would find it hard to love. I don’t find that at all, but it’s not relaxed and certainly not smooth. I have the idea that it’s not very tuneful or lyrical, but there was some lovely tuneful trumpet overlaid as head or solo. It started with unexpected cool which threw me off, and this ‘50s cool returned a few times in the night.

But mostly this was insistent, unrelenting syncopations on bass and often unison on piano, continuing under heads and solos; sometimes four to the floor bass; often with 4 bar chord changes. Mostly this presents as harsh, but there were also a few times of gentleness and mythical, floating passages. But then a bass solo that tore the edges of acceptability with initial spaciousness and subsequent mania. Or a piano solo that plays with the repetition, repeating sequences mirroring the predictability of it all. Minimalism needs change as contrast, and that was there too in arrangements, although there was at least one tune that held its syncopations throughout. I felt an overarching consistency in style, a concept that’s come from time together. Joe told me he wrote all the music but I think the band has played together for several years. They are about to record, so that’s good. The obtuse titles fit the style, too: Axis, Planes of intensities, Incription, Tow, Pull the other. And they played Restless, that lovely and quite complex song by Australian Crawl. They said it was their first cover. Nice. Frantic, or metal or conversational or unexpected cool, this was a fascinating outing and not for the casual jazz listener.