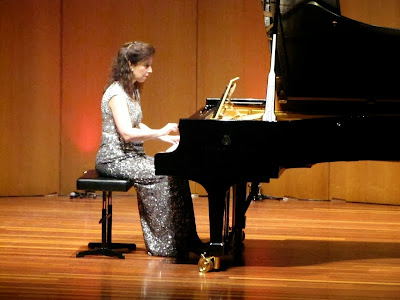 I was taken that it was so quiet when Angela Hewitt started up on Bach's Art of Fugue. It was the major work that she was playing at the Llewellyn, but the first half audience had been annoying for coughs and cleared throats. I wonder why this happens to people, that they are suddenly aware of their throats, but it does. She’d played Bach's Passacaglia and fugue, Cmin, BWV582, then Beethoven's Piano sonata no.31, Ab maj, Op.110, before the interval. A whole program of flat keys; nice. I'd heard her talking on the Music Show on Saturday, and they'd been chosen because they both had fugal sections. Fugues and canons are a classical concept and they are still a little fuzzy in rny mind, but I could easily identify the effect when they occurred in the Beethoven. 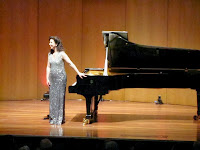 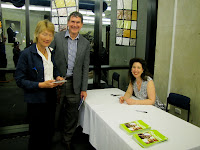 The Bach was more along the lines of counterpoint anyway, but I noticed it there too. It's all a very structured and formal sound and I expect it's very attractive to musos. One classical pianist I spoke to after the concert said he found Beethoven easier to play, and that Bach requires more intellectual effort. I could believe that. But then after interval, Angela came on stage for her major work. She was playing Contrapuncti I-X. She gave a wonderfully rich introduction and description before playing: each individual fugue; how she prepares and notates the works before learning them: how the lines breathe, as if pausing for breath, and flow over each other; how this was Bach's last work (the last fugue is unfinished) and a challenge to approach; how indications of tempo and interpretation are lacking; how the 8th was the most technically demanding, or the ... is complex so needs space or the ... is simpler so fits a more rapid tempo. I long for this information and I understood it all, even if I didn't remember the details when the performance came. So she played. With iPad and page-turner underfoot. Clear, precise, mostly gentle always perceptive. She said this work demands concentration to play, but also to listen. There are at least three lines interweaving, often with padding (I thought she jokingly described one more portly segment as "messy"), but I'm sure I didn't catch it all. But there was real clarity of concept here. I'd wished for harpsichord at times for the Passacaglia and fugue, but I didn't feel this here.
Our version at home is by the Julliard String Quartet, and the Art of Fugue has been recorded on organ and harpsichord and strings and chamber orchestras and more, but the clear, strong piano (presumably she was using the big Steinway concert grand) seemed good to me. Megan preferred the string quartet with its more identifiable parts. Fair comment. Even just half the work (10 Contrapuncti, only the first of a double CD) was a big effort. I noticed some noises again towards the end so it was demanding for audience too. Musica Viva describes Angela as “the pre-eminent Bach pianist of our time” and for Stereophile mag she’s “the pianist who will define Bach perfomance on the piano for years to come”. These are big claims but, for me, this was simply a gripping and crystal clear performance and one to remember. Wonderful. Angela Hewitt (piano) performed for Musica Viva at the Llewellyn Hall. She played Bach's Passacaglia and fugue, Cmin, BWV582, then Beethoven's Piano sonata no.31, Ab maj, Op.110 and Bach’s Art of Fugue Contrapuncti I-X.

Thanks to Musica Viva and photographer Rod Taylor
Posted by Eric Pozza at 9:34 pm