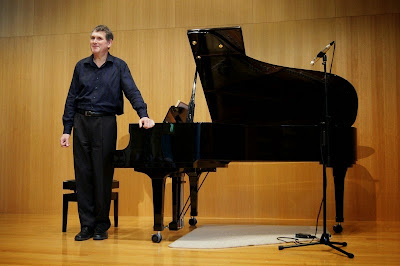 It's ages since I've heard Robert Schmidli playing. He's a busy man in his outside life but obviously his piano is a serious commitment and maybe a relaxation. This time, again, he played Beethoven and this time, again, I enjoyed the dissonance in the other piece he played.

The Beethoven was his Sonata no.5 in C minor. Three movements, 3/4 then 2/4 then 2/2, brimming with nervous energy, an early period sonata apparently anticipating Pathetique and the 5th Symphony. (Thanks to Wikipedia). Robert is not a professional but this is serious playing nonetheless. He played at a fairly leisurely pace, with considerable dynamics, light touch on some lines, nicely impassive on some other sections. The second piece was Kabalevsky's Sonata no.3 in F major. Kabalevsky was apparently less challenging to the Soviet state; he'd joined the Communist Party and embraced socialist realism. The fount of wisdom (Wikipedia) says he "preferred a more conventional diatonicism, interlaced with chromaticism and major-minor interplay ". Yes, the sonata didn't sound so dramatic, but it remains modern with impressionistic hesitations and develops some interesting harmonic colours. Robert seemed surprised when mentioning it was the favourite of many in the audience. I wasn't surprised. It was not a major challenge, our ears are atuned to this era and it's a welcome change from the core repertoire. To finish, Robert played an encore of now-Australian composer Stephen Hough, On Falla, an obvious dedication to Manual de Falla punningly titled to rhyme with "on fire". This was different again, Spanish, descending chords reminiscent of bull fights, romantic dance scenes and Corea-like melodic snippets. Nice piece and nice concert: a worthy outing.