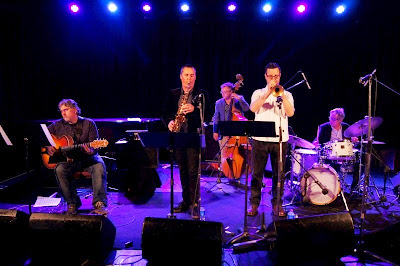 I remember being taken by Allan Browne when he presented The Drunken Boat, a dedication to Rimbaud at Wang in 2007. He did it again and I realise now that he did it with the same band. This time, the piece was on Homer's Odyssey. Allan had given a Penguin copy to each of the band and they proceeded to write tunes to relevant myths and a year or so later they recorded and performed it at Wang.

I found it deeply satisfying, profound even. It was mostly done with no chatter, although there was a stop or two. There was also some reading form Homer by Allan towards the end. I was a bit surprised by some chatter on stage, but these guys know it and treat it as an old mate, I guess. Some great playing, too. Allan is the senior, herding his crew of adepts through swamps and adventures with the lightest of drums and guidance. Geoff's guitar is deft and speedy; Eugene and Phil up front were one voice or skilled soloists, serious but merry; bassist Geoff was light in line with Allan's lead. There were a ream of written notes here, lots of counterpoint, lots of dots, space for solos all beautifully integrated into the whole, some deeply settled grooves. There was life, deep thought, musical purpose, construction and response to a formative work of Western thought. I guess the word is profound. Allan said they'd make no money from it, like the previous albums of a similar style, but it's an erudite work. I left feeling enlightened. Impressed!