To start a trek 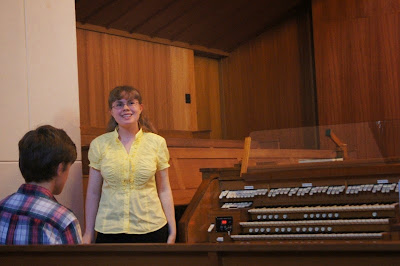 I've been wanting to hear the organ at Wesley for some time, and I got the chance with one recital that I could attend. Lauren Giddy was performing Bach, Krebs, Brahms and Mendelssohn as a recital for the ANU School of Music and audience was welcomed. Wesley are justly proud of this organ. It originates from an Alfred Hunter 3 manual organ of 1893, and following various additions and rebuilds, is now the "largest and most versatile liturgical and recital instrument in the ACT" boasting 42 pipe ranks and 2,466 pipes. 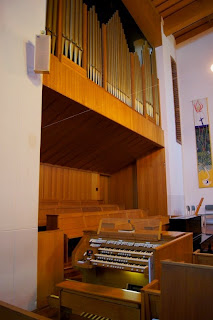 I understand audio better than organ specs, but I enjoy listening to the swelling, delayed tones as pipes form notes and the variety of tones and impressive power that an organ can pour forth. Not for nothing that it's associated with religion and the divine. Lauren played 4 works for a fairly short recital. Bach's Prelude from his Prelude and Fugue in C major was joyous, loud and unrelenting in 3. Krebs was more meditative, slower, in 4. The Brahms featured melody played on the pedals. Lauren played the first movement from Mendelssohn's Sonata no.3 A major and this was the audacious, loud, bold take on the pipe organ that everyone loves. I much enjoyed this visit to one of the pipe organs of Canberra and thanks to Lauren for that. Next task is to explore other locals.

Lauren Giddy performed a recital on the pipe organ at Wesley Uniting Church (adjacent to the Wesley Music Centre).

We've been to a couple of organ concerts there. The two I remember were women - one a graduating concert a few years ago (Nicole Marane I think her name was), and one this year by an organist now based in Paris but who comes here pretty well every hear to perform, Sarah Kim. She was just magnificent.

Len is a big organ fan in particular!