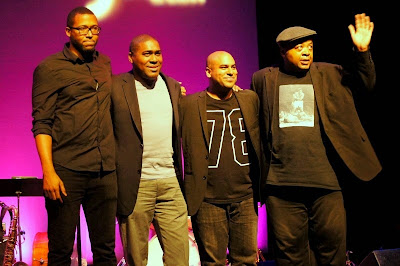 I carelessly missed his workshop, but apparently Jeff 'Tain' Watts talked about some tunes that had me confused on timing. His concert on Saturday night was not just unrelenting and virtuosic, but was a mass of odd times. Tain advised that one tune was in 13 so he counts 6 1/2 twice. A joke, no doubt, but it's indicative of the complexity of playing odd and changing times and the concentration required. Tain was the other major international at Wang 2014, but unlike Enrico Rava, he had his own band in residence. And his family; more on that later. Suffice to say I was enamoured by the first concert and hammered by the second.

He's obviously a driving, busy, skillful drummer in a long-established style. His is not a sparse, punctuated style, but an avalanche of colours and rhythms and intensity that has you pushed into your seat. Same with his band. I sat with new Wollongong mate and drummer Glenn at both concerts. His description was "unrelenting". I had this feeling for the first concert, but intensely so for the second. There was little letup here. Skills, chops, power, speed, excitement with changing times and arrangements. Day 2 was much more simple in terms of tunes and structures, or maybe I was just more atuned. Day 1 was all over the place in time and composition and arrangements and with several feature solos from Tain and many from tenorist Troy Roberts (from Perth) and pianist Osmany Paredes. Tain introduced a final encore on Day 2 (this was a 90 minute concert to end Sunday night and the main festival) saying bassist Chris Smith likes this one. I'm a bassist and I picked up straight away that it's a killer with incessant and very fast walk; something most bassists dread. Probably another of Tain's jokes. Troy did a great job, provided some excellent solos including a hugely extended one at the end on Day 2, and always amazed me by walking back to his mic at the last minute following piano or other solos. Osmany played plenty of fast runs peppered with bop left hand comping - all fast and wonderfully easygoing - but what most impressed me was his tone - strong and loud. Someone mentioned the latin players play hard and this was certainly strongly played. Great. And the quiet but tall Chris down the back was everpesent and up to some ostinato and walking work at the extremes. Plenty of communication, too. Tain would look to space or to the others, Osmany and Troy looked over at apt moments. A wonderful example of the intense pressure cooker of the top level professional US jazz players (I think back to very long and energetic concerts by Corea, Mahavishnu and others). Take no prisoners.

But Tain was at Wang with family, too. Laura Watts performed her own concert first up, with Tain and Chris in support. Laura was born Laura Kahle in the US, raised in Queensland, friend of James Sherlock and Zac Hurren (who sat in for this concert along with Troy), now wife of Tain and mother of two daughters in Harlem. Small world: Brissie to Brooklyn. Laura is also a significant composer, having works performed in the Lincoln Centre and arranging for Danish Radio Big Band, Wynton Marsalis, Orrin Evans and others. This gig had Laura leading a series of complex compositions from her recording Illicit Inquest playing pocket trumpet with a series of visitors sitting in for various tunes. I felt the gig was a bit unsettled, but there was some impressive playing and rich compositions. I'm listening to the free download of Illicit Inquest as I write this and it's impressive.