And the ambassador played the bass 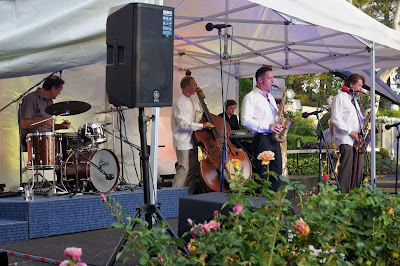 It's not often the tickets for a jazz gig are sold out but this one, a celebration of the 200th anniversary of the birth of Adolph Saxe, in the lawns of the Belgian Embassy, was. It was an attractive offer. Events at a Canberra embassies are often a hit with the locals. This was huge. The numbers swelled to 500, but the garden was generous and the evening was perfect and there were hors-d'ouevres and Belgian beer on offer and a great band.

In a twist that's a local jazz secret (until last Friday) Jean-Luc Bodson, His Excellency the Belgian Ambassador, is also a conservatorium-trained bassist with a love of jazz. That alone would bring the inquisitive, but the jazzers were also drawn by a pairing of the brothers Mackie, both excellent saxists with Tate Sheridan and Mark Sutton. They just played one set but it was strong and well received. It was interesting to again hear Carl with John. Carl played alto on this occasion, fitting for a string of bop numbers, and John played his tenor. Their approaches, perhaps from the different instruments, were more diverse than I remember on John's CD, where Carl also played: different in solo development, phrasing conventions, approaches to dissonance and the rest. But both were excellent and intriguing listens. Jean-Luc held it together very capably with solidity and drive and clear tone, along with Mark, un-extravagant on this evening, but essential. Tate is only a young-un but he's a young gun playing with great energy and passion and real interest. This was reliable, bop-heavy blowing repertoire: Confirmation, My little suede shoes, Round midnight, Tenor madness and Footprints. It's not a steady band, of course, and I know for one that Jean-Luc had a few busy days with other duties, but it was a truly interesting occasion and possibly unique in ambassadorial circles. Following the main band was the Telopea Park High School Big Band. Just Year 10 students, but playing some surprisingly decent big band jazz and finishing with a twist of Nirvana-like guitar dirt. Cool. I can't resist including the pic of three gathered bassists. And if you're interested, I was drinking Leffe Brune. Good on the Belgians, not least for beer and bassist ambassadors and Adolph Sax.

The Belgian Embassy celebrated the bi-centennial of the birth of Adolph Saxe with a garden party on the grounds of the Embassy. Entertainment was a band comprising Carl Mackey (alto), John Mackey (tenor), Tate Sheridan (piano), Jean-Luc Bodson (bassist and ambassador) and Mark Sutton (drums). The Telopea Park High School Big Band also performed.
Posted by Eric Pozza at 12:29 pm