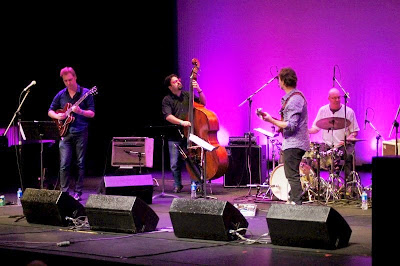 Wang JF is mainly composed of the best of the Australian scene and it's a pleasure to catch up with them. In Canberra, I don't see them nearly often enough and Melbourne and Sydney listeners tend to see their own and not those from the other city. As for Brissie, Perth and the rest, I guess they see even less.

I'd recently seen James Muller and Steve Magnusson on two occasions in two different bands. They are such different guitarists and I was intrigued by how they'd work together. James is the ultimate smooth virtuoso; Steve the intriguingly divergent player. In this case, they were playing with Frank Di Sario and Danny Fischer. Scofield and Frisell were obviously on the program, and Solar (claimed by Miles as were many tunes), an original by Frank and some others. Apparently this was the third time that James and Steve have played together. James was breathtaking. I felt Steve didn't quite get the opportunity for his choppy and inventive style. Perhaps there was some competitiveness, conscious or not. I greatly admire each for his playing so I was a little disappointed by this outing. Interesting experiment, but in the end oil and water don't mix. 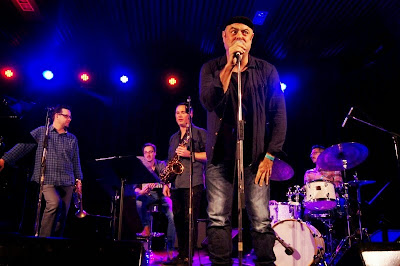 It's ages since I saw Sam Keevers at gigs with Jamie Oehlers and I've held admiration for his playing ever since. I admire the quiet and respectful with depths to be mined. Certainly his playing was like this when he played a set of tunes by Bernie McGann with his quintet. I felt these was clean, neat, steadily swinging period pieces somewhere around post-bop territory, lithe and steady and admirable as carriages for improv.

Spirit song, Brownsville, Sweet Lucy, Mail, Twist. This is standard format with two horns out front. The fabulous pairing of Eugene Ball and Phil Noy were great together and strong apart in solos. Bass was Chris Hale, the first electric bass I'd seen at this festival. From afar, I didn't pick up on the subtleties, but up close this was pick and finger pick and chords with middle, ring and little fingers. This is six-string electric bass, which is an instrument that cries out for a new conception and Chris had one and it was well developed. Not at all standard in this context, but impressive. Craig on drums was steady as presumably required for this outing. Very well played and an admirable tribute and presumably particularly memorable for those who were close to Bernie, for Geoff and others.