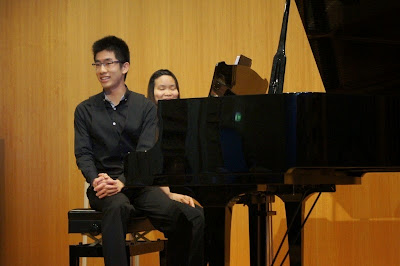 Aaron Chew presented a program called Flamboyant fantasias at Wesley. It was certainly that and the final work, Schubert's Wanderer, was the confirmation. But first, Bach. The first tune was JS Bach but an arranged version by Busoni. It was a strange thing. You could recognise the discipline and regularity of Bach, but this was different, with added dynamics, tempo fluctuations and pedal markings for Busoni's then modern times, all dramatic and diverse from the stately baroque. Then Manuel de Falla's Fantasia Baetica, a virtuosic piano piece written for Arthur Rubinstein and celebrating Aldalussian culture by imagining guitars, singing, stomping, clapping. Then a final Schubert piece, his Fantasie in C major, the Wanderer. Aaron introduced it well: "Schubert ... when he's got an idea, he never lets go. This is 25 minutes, so ... I'll see you at the end". Not wrong; the melodic motif was introduced early and repeated often, even stubbornly, but so be it. Aaron played these three challenging and energetic pieces with great vigour and commitment and I expect the whole audience felt wilted by the end. This was wonderfully vigourous playing on works with virtuosic demands. Flamboyance put to decent use.