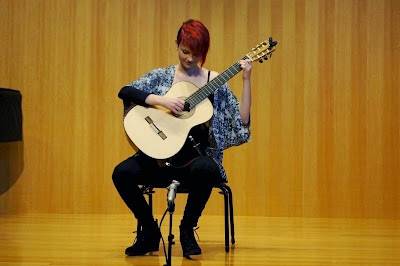 I'm listening to my recording, now, of Stephanie Jones playing guitar at Wesley. It's so delicate and pretty and it's not something I realised at the time. The first take on this music is inevitably "Spanish". Guitar seems to be that. But then to realise the detail and delight in this music and the care and precision with which Stephanie approaches it. It's in her face as she plays. Little smiles, smirks, flitting thoughts. It's music played with involvement and joy and playfulness in the music-making. Any occasional hesitations are greeted with slight frustration, but it's for nothing next to the depth of involvement. I can understand why she'd win prizes for guitar, and she has. This is a deeply pleasurable visit to classical guitar. Stephanie's performing her honours recital tomorrow (as I write this) so she presumably played that recital in preparation. She played without music although these were long and complex pieces ranging over the history of guitar music. First up was baroque, but not like Bach. This was Gasper Sanz Suite Espanola and it was rich in strumming and plucking and earthy as in dance. Next was classical, Fernando Sor Variations on a theme by Mozart, the variation being from the Magic Flute. This music is not guitaristic, too technically guitar-relevant, but nonetheless it's a "testing ground for every aspiring guitarist" (John Duarte). Last were two places from Isaac Albeniz's Suite Espanola, Cadiz and the more meditative Catalunya. Both were lovely excursions in guitar. Guitar seems an unusual instrument in classical music: identified against one culture; sweet and percussive; less common and often alone; very danceable. This was a concert of great delicacy and beauty. Best of luck (or break a leg?) to Stephanie for her reprisal as a recital tomorrow.