What Honours does for you 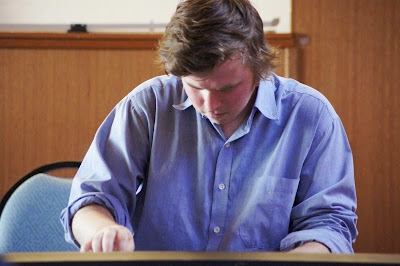 I didn't know Tate Sheridan had played sax. He'd played through the classical grades as a kid then turned to piano and played through those classical grades, then to Honours which he has just completed. I'm sorry I missed his recent recital but I caught him playing solo for the U3A Jazz Appreciation Group and with any luck will catch him at his CD launch next week. This was intimate, sometimes chatty, nicely open sounding so his playing was clear. He played an electric piano, so the clarity and life of the acoustic was not there, but Tate took the opportunity to use various tones, Rhodes, perhaps organ, funky bass for various tunes. He played 7 tunes. First up was a take on Honeysuckle Rose, introduced with a moody impressionism, then into stride and through time-relevant lines and some more modern dissonance and rhythmic variations. I love this contemporary style that visits the traditions with respect but also treats them with contemporary sensibilities. Jazz has its historical sweep after a century. An individual may prefer one era over another but it's all worthy and I personally like some catholicism. Then through a series of originals. Run don't walk is a composition related to Tate's honours thesis on Cuban left hand piano and it explored all manner of approaches: lh ostinato; rh single note comping; rh improv; a more even rh/lh style that had classical balance; syncopated lh bass line; perhaps more. Tate praised the pride, patriotism, energy and passion of Cuban musicians. Energy is obviously a concern; he mentioned it several times later. Then a short ballad of 8 bars and #11 harmonies that suggests a B-section but stays short and beautiful. Tate talks of writing words for this, saying lyric writing is a compositional technique that assists with phrasing. I didn't know that Oscar Peterson writes lyrics for most of his tunes, even though no-one knows them. Nebraska 1978 was different; a funky number with Rhodes tone, perhaps organ lh, written with Calum Builder for their duo CD. Tate talked more about pianists, Keith Jarrett, Art Tatum, blind pianists, handspans (Art Tatum and Oscar Peterson can/could easily span 11ths; most can just manage 10ths), Blind Tom, Gene Harris ("great energy; really important"), lessons. A final lively but exploratory Billie's bounce. During the visit, there was a quote of Miles saying that "jazz is the thinking man's music" although Tate was at pains not to denigrate the skills and capabilities of classical musicians. Talk of music as a language, for communication, like spoken words: "You have no script when you wake up in the morning" as a parallel to improvisation. Talk of solo piano as "daunting", more demanding than playing in an ensemble. Talk of his teachers and varieties of perspectives, and mention of some of our impressive local pianists. These visits are a chance to talk to practicing musicians and to hear them unadorned, transparently present. A terrific experience.

Tate Sheridan (piano) chatted and performed a set for the U3A Jazz Appreciation Group.
Posted by Eric Pozza at 5:55 pm