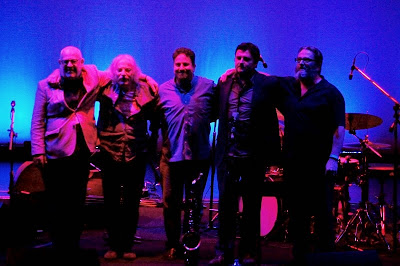 At the end of his concert, Enrico Rava said he usually doesn’t like a gig in the morning, implying this was different. I think it was. He looked genuinely interested in several of the solos, patting Frank on the back after one of his, leaning against the piano an gazing at Paul during another, smiling at Mirko and Niko at other times. It’s a matey friendship and professional respect on stage that we were to see after the last gig on the night, too. Enrico’s second outing was with a crack team and it was a standards gig. Yeah.

That interested me and surprised me in some ways. Standards are often denigrated, but Miles did it and here Enrico Rava did it. The tunes were immediate and comprehensible and the lesson in how you can meld and bend them was intriguing. They started with a cool 4/4 funk groove and I was surprised when it became You don’t know what love is. Not much more standard than that. But these are lessons, exhaustive in their openness to variation. Enrico holds the feels wonderfully so his departures are unobstrusive. Again, the spaces, the interludes of long quick phrases, the tonal plays and a less frequent use of the flutter to the sky. He’s a master. Fellow Italian, now Melbourne-based saxist Mirko took up on some of these skyward flutters and I liked that reference, and he would also play noise, but he was fat, more smooth and straight in spelling the chords while adding passing chords. More harmonically evident. Paul Grabowsky is in another space altogether. His takes are a melange of styles bundled together, harmonic colour changing on a whim. This is death defying improve and a lesson in exploration. There’s no doubting his technique or capability, which I presume is classically developed, but it’s not an easy place to visit. His take on Funny Valentine was a dream; his takes on the more boppy numbers were challenging and stylistically multitudinous. I’m intrigued. Frank was a straighter proposition. Lovely solos that were fresh and unpretentious revisits to the melody. Just so nicely done, and obviously well received by Erico. Niko is another of the Melbourne pack that I wish to visit more. Musically outspoken, vivacious, perhaps capricious. Always a challenge to staid concepts. Nice, but needing acclimatisation. So, Enrico played a much different concert on his second outing. Showing us what standards can be. Lovely.