To commemorate, not to celebrate 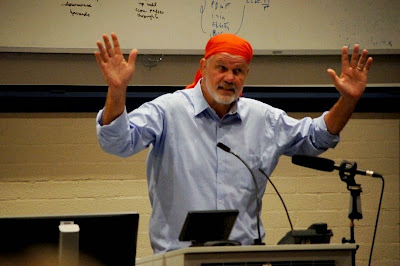 Peter Fitzsimons has a red bandanna and it stands out, even in the Sydney Morning Herald where he has a weekly column on Saturdays. But he stands out also because he's tall, he can talk like hell and it seems he can also write like hell. He's got a string of books to his name and we went to a launch of his most recent one, Gallipoli. It's the 151st (or thereabouts) book written about Gallipoli in the last few years and one historian asked what he had to add. His answer was that he adds his approach, to use fiction techniques to personify the experience (or thereabouts). I could believe it. His chatter is involving and brings out stories of pain and loss and humanity and purpose (or lack of it). He asked why we remember Australia's defeat at Gallipoli as a key moment in our national formation. He ended by recognising it ("not to us to celebrate, but to commemorate") as the key action of the budding nation. Norway has Amundsen reaching the South Pole; Australia has Gallipoli. He quotes Banjo Patterson in confirmation ("We're all Australians now") along with Charles Bean. He queries Gallipoli for the poor strategies and the British empire centrality. He welcomes the involvement of Keith Murdoch, he honours the good will of Australian and Turkish foes, he enjoys some humour and despairs over some tragic matters, like the failed battle at the Neck where bombing ceased 7 minutes early allowing the Turks to ready themselves to cut down waves of bayonet-wielding Anzacs. He recounted that Col. Alex White had said "Men, you have 10 minutes to live" but that was shortened when the bombing stopped early. (The battle of the Neck is the true story behind the film, Gallipoli). He spoke of numbers lost (~8,000 in 9 months for 400 acres), he recognised the deeper losses of the Brits, he pained for stories back home of families. One example was Hugo Throssell, VC, eventually pacifist and communist fellow traveller, finally a suicide case. He mentioned Keating and his wish that something peaceful should be celebrated as the birth of the nation, the fact he'd never attended Gallipoli and his admiration for Australia's success at Kokoda. He mentioned Bob Hawke and his greatest moment, when 50 95-year old diggers embraced 100 living Turk combatants on the 75th anniversary of the campaign. He's also on a committee for a new Australian flag, and told the story of Seinfeld speaking about the Australian flag "I like your flag; Great Britain at night". 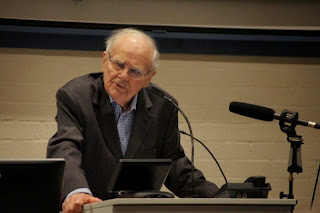 Prof John Maloney thanked Peter and his summation was particularly strong. He welcomed Peter's contribution to understanding of the campaign. He noted that we no longer declare war; we just go to war. He told the story of strategic decisions on Australians at Gallipoli being taken in Britain. He told of a communication by the then Governor-General that an expeditionary force of 20,000 would be available for the British PM to use as Britain deemed fit. Apparently the Australian PM (remember, this is well after the Australian constitution was approved, although as an act of the British Parliament) was not, at the time, to communicate directly with the British PM. This in the context of Menzies' WW2 advice to Australians "Fellow Australians, it is my melancholy duty to inform you officially, that in consequence of a persistence by Germany in her invasion of Poland, Great Britain has declared war upon her and that, as a result, Australia is also at war. No harder task can fall to the lot of a democratic leader than to make such an announcement." [From speech made by Prime Minister Robert Gordon Menzies, 3 September 1939: Screensound Australia, National Screen and Sound Collection, Screensound Title No: 387919] (listen at: http://aso.gov.au/titles/radio/menzies-speech-declaration-war/clip1/). The similarities to our recent wars are evident even if we now follow a different leader.

WW1 and Gallipoli was a failure of British Empire and European nationalism and Australia was a willing factotum but we can respect the loss if not its political use. These words from both Peter Fitzsimons and Prof John Maloney were touching and informed and continue to be relevant today. We should learn something from this and other history, but that's been said often enough before. In the meantime, Peter's words ring true to me: "not to us to celebrate, but to commemorate". Peter Fitzsimons launched his new book Gallipoli, at ANU. Prof John Maloney gave thanks and a few concluding words.
Posted by Eric Pozza at 9:03 am