Mike and the awards 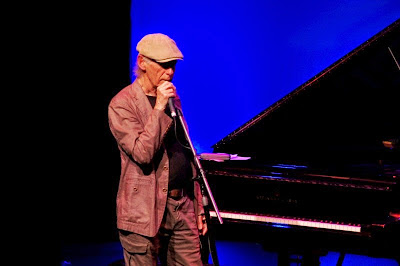 I caught Mike Nock as a performer but he's also the chair of the judging panel for the National Jazz Awards. The awards were for guitar this year and the judges were Mike with James Muller and Steve Magnusson.

Mike Nock is a senior Sydney figure noted for his support for a new generation. At Wang, his band was called Trio+2, the extra two being younger sit-ins Carl Morgan and Karl Laskowski: younger maybe but not unknown. This was unrushed, well developed modern jazz with a feel of rock grooves, often developing some power, with plenty of space for solo development: Outcast, Brett Hirst's Changeling, Perspectives, even This dude abides (written by Mike to a quip in the movie, The Big Lebowski). The rest of the trio was Brett Hirst and James Waples.

I was at Wang for the last guitar awards, and Carl Morgan, ex-ANU Jazz School and well known locally at the time, was on the shortlist. He didn't make the final that time, but he returned victorious. I only attended the final (given program clashes; I would love to have attended the heats). The final contestants were Hugh Stuckey (Adelaide, now Melbourne), Peter Koopman (NZ, now Sydney) and Carl Morgan (South Coast, as I remember, then Canberra, now Sydney). Carl played last and was a clear winner: confident, communicating, interesting and thrilling. He played Scofield's You bet,m Joe Henderson's Isotope and Coltrane's Naima (in a heavy rock-influenced take that worked). Hugh played first with a clear, traditional sounding guitar. His tunes were You're changed, Schofiled's Don't shoot the messenger and Rollin's Tenor madness. Peter played second, more driving and modern. His tunes were Larry Young Backup, Isfahan form Ellington's Far East suite and Scofield's Loose canon. Backing was from Des White and Ben Vanderwal. It's always a game to pick the winners. I've only listened to the finals a few times but never exactly matched the 1-2-3 order. This is art with subjectivity and personal preferences. Congrats to all; they are all worthy players.