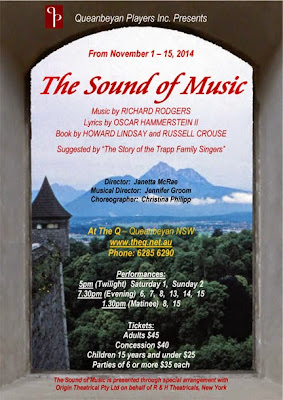 I am now inducted as a Pit Player after finishing my half of the season of Sound of Music. I'm bass, of course, sharing with Naomi Barber. We were one of about 25 players on any one night, playing the charts for this popular, touching, if sentimental work. It's not hard to read or play, but it is surprisingly effective. SoM is by Rodgers & Hammerstein, so by a well known name in the business. It's not without reason that it's popular. I've been humming the tunes for weeks now and it's one for the kids. The opening night got a good review from our local stalwart, Peter Wilkins, so most nights thereafter were sold out or close to. The pit is partly covered so some instruments (including bass and cello) were dulled. I could just play louder and I needed to as a single bass often playing pizz. I've seen the actors in rehearsal but I could see nothing from my corner of the pit, so, other than the nuns' habits, I have no idea of costumes. What are Maria's dresses like, the ones that caused such consternation for the Captain? And how daggy were those curtains? As for the grown up dance and kiss, I have no idea. [Maybe our mature PM of the grown up government could advise; but then being grown up is not a concern for adults, just for adolescents]. I could chuckle at some quips though, and it's surprising how much extra I caught after hearing the script about a dozen times. And there were some audience comments which were good natured and fun, but some things strangely missed, like the "poverty, obedience and ... chastity" line that found some laughs in rehearsals but not in the shows I played. Cheers to the orchestra and Jennifer Groom who was musical director, and also to a great cast, including two families of children. Maria was the obvious standout, strong in acting and singing. Not for nothing that Peter Wilkins wrote "[Veronica] Thwaites-Brown's performance is a triumph in a production that will move audiences to tears, evoke laughter and remind us that we can all climb mountains to follow our dream". But the cast throughout was impressive and energetic and the singing was good and sometimes surprisingly so. Judith Colquhoun as Mother Abbess could bring you to tears with her feature song, Climb Every Mountain, and the wedding march also tugged heartstrings. It's been considerable work, lots of fun and gives a feeling of achievement. Thanks to Jennifer and orchestra and cast and crew for a great run.

Sound of Music was presented by the Queanbeyan Players at TheQ. Jennifer Groom (musical director) led the orchestra.