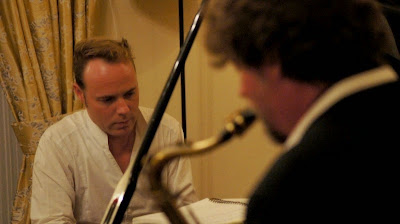 Jef Neve was passing through Canberra again and it was Belgian beer for a performance at the Belgian Embassy. I notice Jef is also playing on this tour with the JazzGroove Mothership Orchestra. He's written for, and performed with a dance studio in Antwerp Belgium. His new CD, One, has a photo of one of these dancers and includes tracks written for them. But also interesting was chatter about recording several tracks for that CD in Studio 2 (the Beatles studio) at Abbey Road: talk about what pianos there are, mic stores, who was recording following him (Shirley Bassey), minutiae of a musician's fascinations.

Jef played two sets. The first was tracks from this CD, entitled One. These were all originals except for a take on Lush life. Jef is classically trained, and it's obvious in his playing. A friend suggested a resemblance to Chopin (I heard Gershwin at times) but it was definitely a virtuosic style with roiling left hand arpeggios and rapidly repeating notes and flourishing right hand licks and a heavy, broody atmosphere and intense, lengthy crescendos and releases. All full handed chords and rich arpeggiation and dissonant blends thrown in fairly often to colour the intensity of it all. So it was a surprise to hear some more standard jazz piano in the second set with John Mackey, when Jef dropped into stride and left hand bass lines and sax-line solos. John sounded airy and understated at first and you could hear the two players developing together, melding, coming to an understanding as they played through a few standards - Monk, Body & soul, All the things you are, Sentimental mood, Tenor madness. Just a short set and not long enough but it was an interesting match. Then a final original to end. You could wonder how loud a piano can be. It can be loud and, as I say, it can be an orchestra in a box. Jef's piano is like this, loud and self-contained as a soloist, but there's plenty of awareness and divergent skills to sit with others, especially a sensitive player like John. So this was two sides of Jeff and a wonderful pairing to boot. ArtSound was recording so you can expect to hear the concert sometime soon on Friday Night Live with Chris Deacon. And just to justify an oblique title, Jef is Belgian and this concert was at the Belgian Embassy and the beer was Belgian. Jef Neve (piano) played solo and with John Mackey (tenor) t the Belgian Embassy.
Posted by Eric Pozza at 12:50 pm