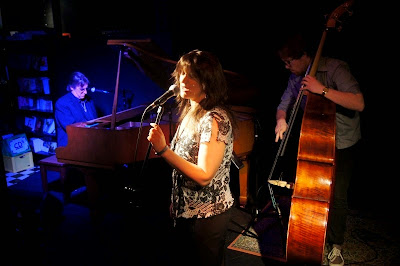 In2Deep performed at Smiths at short notice. I know their tunes perfectly well and I admire their performances and especially Mike's writing. Mike and Rachel are about to release a CD of Mike's songs. They are good. Many are modern instances of the standards repertoire, similar harmonic movements and melodic lines and with that discrete, rhyming wit that was one aspect of that era. Rachel thought aloud about, who, Peggy Lee and Rock Hudson (?), when introducing the romantic swinger, Just for the Heaven of it, and Disney films for another. They ended with their heartrending paen, Edge of time, the theme for the Canberra movie, Locks of Love (I'm told to look out for this on TV on Valentine's Day), reminiscent of the theme of the film Baghdad Cafe, I am calling you, and brimming with its dolefulness. These are both movie themes; perfect. Otherwise, there was the sentimental slow swinger April Rain, and the witty latin Symbiosis, and the Arabic scaled Across the Gulf. And a few actual standards from the books. Mike's writing is memorable and Rachel's interpretations are great. And Alec Coulson sat in for some bottom end for this gig. Nice one.

In2Deep are Rachel Thorne (vocals) and Mike Dooley (piano, vocals, compositions) and they were joined by Alec Coulson (bass) for a gig at Smith's Alternative.
Posted by Eric Pozza at 3:14 pm