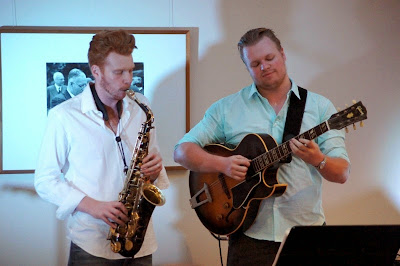 This is a quiet time in Canberra. The locals are down the coast or off to visit rellies. The North side is lively with the Summernats. There's not much music around. So I was happy to see there's jazz at the Old Parliament House cafe on Sunday afternoon. This day it was Victor Rufus and Calum Builder. Just standards but nicely adventurous as they moved easily between styles, swing or rubato or minimal or balladic. Calum took things slowly and even contemplatively, navigating with varying and unexpected intervals. I've been reading recently of the value of intervals for melody and this was a sampler. Light on the scalar runs; ready for occasional flourishes; enlivening the drama with varied feels. Victor played chords and bass lines and took solos, although his solos were unaccompanied so more sparse, despite a quicker take on the changes. The tunes were standard songbook - Black Orpheus, Someday my prince will come, Tuneup, Darn that dream, All the things you are, Recordame and the like - but how nice that there's some music around town in this tine of cultural drought. And they are standards for good reason.