An organ at the festival 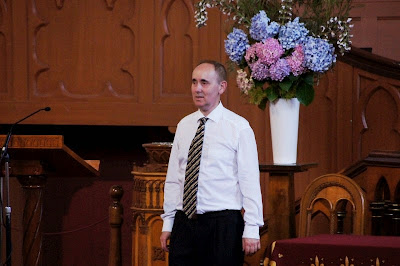 It took until the third concert to hear a genuine concert on one of the installed church organ of Ballarat. This was the Fincham & Sons organ at the Ballarat Central Uniting Church. I’m staying with a heritage architect who tells me this organ is of historical significance and protected on a State Government register ( “there are not many organs on that register, I can tell you”).

The programmed organist, Italian Ferruccio Bartoletti, was sick and unable to travel. Anthony Halliday replaced him, amazingly with the same program with just one change. This was a program of Buxtehude followed by JS Bach. Standard names but varied. I enjoyed the sine-wave-like purity of the deep notes and considered the more edgy overtone-rich higher tones. I wondered about the sense of timing that follows those slow attacks on low notes. I chatted about the multiple manuals and the rows of switches for different pipes and pipe lengths and was surprised when I saw the range of other switches close up. I was amused to think how unprepossessing it is as a visual spectacle, just one organist with his back to audience, despite the impressive machine that’s under control. I followed tunes of interweaving counterpoint or sturdy bass lines or more chordal orientations. I enjoyed the Buxtehude but deeply responded to the inevitability of every Bach invention, with its ideas that never jarred, being always carried through to resolution. But mostly I liked the big, swelling tones when the machine let go. There was a little of this earlier on, but the Bach Passacaglia BWV582 was the summit of the day, all insistent and unyielding and just plain big. Obviously this sells organs to others, too, because it was the final piece. That was fun.

Anthony Halliday (organ) played a program of Buxtehude and JS Bach on the Fincham organ at the Ballarat Central Uniting Church.
Posted by Eric Pozza at 10:33 am