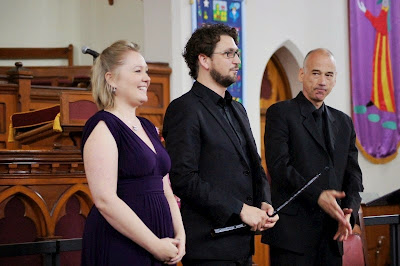 Concert 2 was at the Neal St Uniting Church and this time we did hear the Fincham church organ although only as an improvised introduction to the main concert.

. It wouldn’t have been heard during the festival otherwise. This was historically an older set and a much more moderate in size. Camerata Antica was a trio of soprano, cornetto and baroque organ and the music was of the sixteenth century with just a bit of the following. There were new techniques to learn and new instruments. I can’t remember hearing a cornetto before: somewhat like a trumpet tone, but curved, timber with leather covering, flute-like no valves, presumably conical. Apparently it was the major treble instrument of the period, before the violin took over. Also divisions and diminutions, which were explained as essentially a type of improvisation of the time. Music was from Byrd, Monteverdi, Frescobaldi and Bassano, Caccini, De Rore, Nauwach and Corradini, and two from Purcell in the next century. There was a mix of combinations: organ with soprano or with cornetto or with both, and the Gloria from Byrd’s Mass for 3 voices sung by the three performers (as STB?). It all worked in this space: informative intros, varied combinations, antique tones and ornamentations. The modest baroque organ with a brass-like cornetto and Anna’s wonderful, rich, pure soprano voice, high but not stretched, ornamented but not contrived. Lovely concert.

Camerata Antica is based in London with formation members Anna Sandström (soprano) and Matthew Manchester (cornetto). Anna and Matthew were joined here by David Drury (baroque organ).
Posted by Eric Pozza at 7:32 am