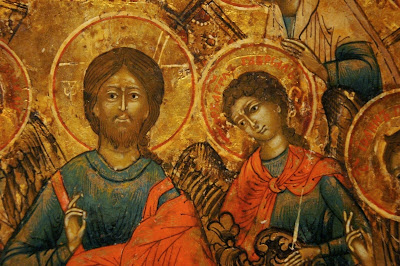 Ballarat was the richest metropolitan area for 2 years at the time of the Gold Rush, 1851-late1860s. You can see it in the architecture. It’s grand, Victorian, sturdy, has lots of churches, wide boulevards, a stately railway station. What’s left of it, that it.

The developers will get in to make a quick buck when they can and they have on plenty of buildings. My heritage architect host walks the streets with stories of lost and saved history and inept design. But there’s still plenty to admire. Like any self-respecting Victorian community, Ballarat also has its art gallery, and it’s a little gem. I’d seen the Eureka Flag there about 20 years back, but now it’s moved, to a democracy museum near Eureka Stockade, so still in Ballarat. Now the gallery has had an extension, so it’s a worthy and bigger visit. We went for the current blockbuster, Eicōn : icons of the Orthodox Christian World. It’s small, in 3 rooms, perhaps 70 icons dated over a millennium. It’s all religious, all Saints and martyrs and Jesus and Mary, mostly painted gesso on linen with a strangely curved and indented surface. I admired the miniature-like details, how the best would glow with skin tones and single black lines would define a face. I was amused that so many Madonnas and children and Assumptions were laid out the same. I noticed just one Pietà. I admired the effective lighting and also the significant crowd that was in attendance. We wondered at a lack of variation over time and place. But to see such a group of icons, together, for comparison, was fascinating. 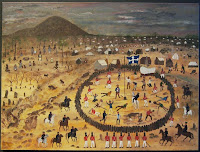 But the Gallery offered more, too. The permanent collection is small but impressive, including plenty of names, spread over the last 150 years or so. I admired the ships and sturdy citizens and mythical themes of the 19th century. Then the artistic exploration of the 20th century and the quizzical approach of today and a few impressive Aboriginal paintings. The collection tends to local (Victorian) and they are seriously worthy pieces. There were several other temporary exhibits on show that we could just pass through. One was prints, mainly from the collection of the Baillieu Library at the Univ of Melbourne; again, lots of mythology and history and featuring many European names like Rembrandt and Dürer. This was an excellent and expansive display. Another was of the Lindsay family. We all know Norman of the Magic Pudding and the seductive nudes, but the family of 10 children and four noted sibling artists were from Creswick, 18km from Ballarat. Their family living room is recreated in the gallery, accompanied by a string of paintings. I can’t resist including a pic of one particularly alluring work by Norman. The third exhibition was the 46th Ballarat National Photographic Exhibition. I found it mostly technically competent but predictable stuff (as I find most photography competitions) but there was some genuine humour and social responsiveness in a few of the works.

This is only my second visit to the Art Gallery of Ballarat and it impressed me beyond my fond memories. A good sign. Ballarat has a worthy little gallery and it’s a highly recommended visit in my book.
Posted by Eric Pozza at 9:39 am