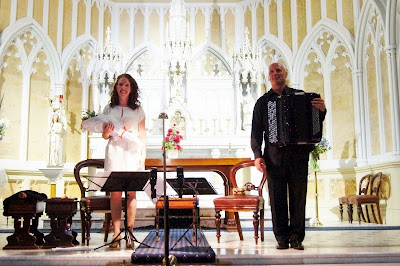 I’ve now been to four concerts at this Organs of the Ballarat Goldfields festival and the differences between them have been immense: a big Bach masterwork, a fine early trio with soprano and cornetto, a grand pipe organ and now a concert of recorder and accordion that ventures from Baroque through Scottish and Spanish and into contemporary Australian commissioned works. Wow. Who’d’a thunk it, doubly so on these instruments, but it worked a treat.

The Ortiz and traditional Scottish tunes were more folky and harmonically simpler. Palestrina and Bach and Locke (I was less clear on the Locke) took us back centuries to a music that is obvious for the recorder. But this pair are far more adventurous. I was most taken by two contemporary Australian pieces. Firstly, Andrea Keller’s Where is everybody? It’s a meditation on the universe and our lonely place amongst infinite expansion. Genevieve played bass then sopranino then bass recorders, pairing notes of varying intervals over an accordion soundscape, then melody over shifting chords and mutating arpeggios. Andrea Keller. That’s Melbourne jazz territory; it just shows the wealth of crossovers in contemporary music. Then Damien Barbaler’s Shadow box, two excerpts from a 40-minute piece with video about memories and echoes. I was unsure how much improv was here, but it seemed frequent, especially in James’ response to Genevieve’s leads. In style, Megan thought Stravinsky, I thought Debussy or Ravel. Neither are anywhere near common recorder or accordion territory. So this concert was surprising and a huge eye-opener and a thing of wonder with its fine playing and inclusive pallette. Otherwise, I thought of the family of recorders, wondered at the ornate, Francophilic Loreto chapel the concert was performed in, committed to read up about the range of accordions and their various technical matters (not all have piano keyboards and this one didn’t). This was one fascinating outing.

Genevieve Lacey (recorders) and James Crabb (classical accordion) performed a vast range of musical styles at the Loreto Chapel in Ballarat.
Posted by Eric Pozza at 11:36 am