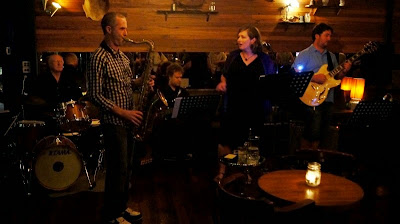 Bella Groove have been playing around Canberra frequently of late. I finally got a gig to find the band is a string of mates from the jazz scene, fronted by singer Elise. Elise, at least, was new to me. Bella Groove play the jazz standards and more with a funky, rocky, electric twist. Take standards and some favourite rock and pop tunes, add electric bass and choppy guitar, drums and tenor, and a voice over with flute for a softer colour. It's a good night out and these are nice players. John sounded all fat and punchy, very satisfying, improvising and walking and taking plenty of solos. Stew cut through all choppy and clear and edgy with sharp comping chords and blues-tinged solos. Noddy was just plain effective, soloing at will; not needing to read this stuff, although they tell me he can read fly specks on the wall when he needs to. Joe on tenor was the most adventurous, but that's a sax trait: starting his solos with melodic interpretations but soon vearing out in harmony and rhythm; his solos were also the longest. And Elise, firm voiced singer and comfortable leader, stood the front line when not taking flute melodies or solos. I'd missed Beatrice, but I heard Tom Waits' Temptation, CC Rider, Dindi, Old devil moon and Stolen moments. I was sorry to have to leave early. I was bopping. A comfy band playing great tunes making for a night out and a few drinks.

Hi Eric, thanks for the write-up and the compliments. It was nice to meet you. It was definitely a fun night at the Hippo Co. I was so happy with the line-up too!

Just want to point out that I'm Elise (of Bella Groove), not Elaine.