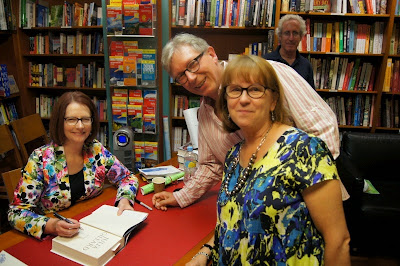 Julia Gillard didn't speak so there's little to report here. But I like the pic and it's not often I meet a PM, even an ex-PM, so here it is. Julia was signing her book at Paperchain and there was a queue outside the door for it. Only in Canberra, perhaps, but she's looking better with every day of her replacements. I think of the lost carbon price and mining tax and the rest, of the heavier cost of fixing this all down the track, of our international reputation as the only country to remove carbon pricing, lots lots more. We've had a tragic time in politics of late, to some degree from both sides of politics, and it's not just us. Princeton researchers have recently concluded that the US is an oligopoly, no longer a democracy. "The US is dominated by a rich and powerful elite. / So concludes a recent study by Princeton University Prof Martin Gilens and Northwestern University Prof Benjamin I Page." (Study: US is an oligarchy, not a democracy, BBC News Echo Chambers, http://www.bbc.com/news/blogs-echochambers-27074746, viewed 4 Jan 2015). Feel free to weep for lost opportunities, express your (informed) concerns and vote accordingly when you have the chance. But then I'd expect nothing less from people who appreciate the fine arts, not least jazz. And if you're interested, Christmas has passed and given the short shelf live of political memoirs, I expect it's now a cheaper read.