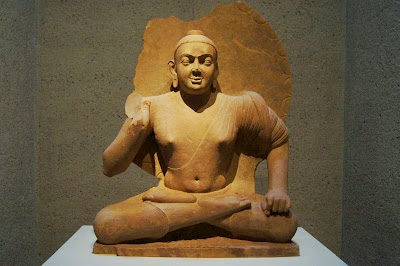 The good news first, or the bad? We visited the National Gallery, a week or so back, to check out another Indian antiquity that will return in short order. This one is the Kushan Dynasty, Uttar Pradesh, Seated Buddha of the 2nd Century. We'd caught the first notable loss, Shiva as Nataraja Lord of the Dance, just a day or two before it disappeared from display.

We'd seen both before, of course, but these seedy goings-on add a mix of notoriety and distress to the visits. Both were purchased from New York-based art dealer Subhash Kapoor. I read that there may be more returns to come. Otherwise, this was just a walk in the park to while some time. Megan caught her strange favourite, the Ambum Stone of PNG, the oldest dated sculpture form the Pacific at 1,500-6,000BCE. These are unknown cultures to most of us but they are intriguing. I was surprised by several sculptures in the Middle East / Asian gallery that had Greek references. The Head of Bodhisattva (also a purchase from Kapoor) had a Medusa-like headdress and there was an Atlas (the Greek god) which is portrayed in this region with wings. These similarities speak to interactions across the Middle East from Alexander or the Silk Road or other. All strange and how fascinating. Then a temporary exhibition of sketches by Frenchman Daumier. Many were good for a laugh, like the South American (sic) kangaroo. I felt a real affinity with the cellist following his music. The good news is that the NGA now allows photography (obviously without flash). Nice, but I must pace myself.
Posted by Eric Pozza at 2:17 pm