Another from the Notice Board 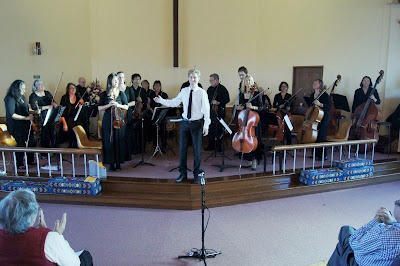 Here’s an interesting one. I like and admire community activities. This was the Musica da Camera String Orchestra, this time led by Leonard Weiss. I found out about the gig from my work notice board but apparently this outfit has been around since 1979 in various guises. They perform 3 concerts per year, each one a pair in Canberra and a local town (Goulburn, Gunning, Cooma, Braidwood). The invite a different director for each concert to explore different repertoires and styles. They are made up of “professional musicians, music educators and talented instrumental enthusiasts”, currently numbering about 20. We are talking of Canberra at the moment (ABC FM has a Canberra weekend). This is the sort of thing I love about Canberra.

This concert was richly diverse. Firstly, Bach’s orchestral suite in B minor: baroque, ordered, always attractive. Then Dvorak’s String Quintet no.2 in G minor: intimations of folk, lyrical, sometimes powerful, sometimes noble. James, our current CIMF billet and viola player, told me this was originally scored for 2 violas, so played as one it’s very difficult. I think this was where I noticed the feature viola: very nicely done. After the interval, Bernard Hermann’s film score, perhaps the most famous of all, the Theme and murder from Psycho, with its screeching violins. Then Vaughan Williams’ Phantasy Quintet, all colour and tone poetry. I had an idea I didn’t warm to tone poems, but I liked this. I must listen further. Then, to finish, Fuchs’ Serenade for string orchestra no.3 in E minor. This is sheer classical, although without the bite of a Beethoven. He was highly regarded in his time and the teacher of Mahler, Sibelius and other at the Vienna Conservatory. Apparently, he’s known for his serenades and was nicknamed “Serenader Fox”.

This is a community orchestra so we can’t expect professional perfection. There were some moments when intonation didn’t sit quite right, especially in the violins (violins have little leeway with intonation), some players looked a little uncomfortable in following the charts and one even joked she doesn’t manage all the notes even if her offsider does. So what? Generally this was easy and relaxed and when they settled, especially in the second half, they were sweet and confident. There were some very capable solo parts, too - the viola that I mentioned, some cello, some violin, and I was impressed that the basses held some pretty long and quick lines. Part-time outfits just can’t take on demanding work like this without some limits. But in the end, everyone was obviously chummy and pleased after the performance and we left in great cheer. I’ll keep an eye on the notice board at work.