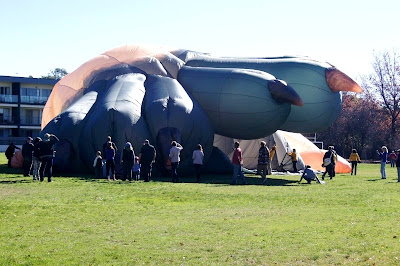 It’s a big piece of art and it’s caused considerable controversy and the inevitable ridiculing of Canberra. I originally thought it’s pretty odd but I’m warming to it. I saw it from a distance today, and it’s a little petite thing next to a standard globular balloon. I guess the hot air is distributed horizontally, so it’s lower and wider than other balloons. I later saw it landed, with crowds gathering around, and it was fun and attention seeking. Nobody would pay it much attention if not for the boobs, of course. Symbolism is not my interest, but there must be some subconscious meaning is this. Bring out your Freud. Two things occur to me. This is not designed by a man, so we can ignore those implications. This is the week that Angelina Jolie announced she’d had a double preventive mastectomy, so there’s the breast cancer angle. Also the predominance of females in the political line: designer, arts festival director and Chief Minister, and, being Canberra, we could throw in Prime Minister and Governor-General for good measure. Whatever, ignoring cost (the perennial attack on most things that don’t suit you these days), it’s an odd and cute thing and I’m coming to like it.

Good post Eric ... we were in Melbourne for pretty much all of its residence in our city but the day the news broke we were in Bendigo Art Gallery where we saw a Piccinini sculpture, The young family.

Anyhow, I'm with you --- it looked more like a tortoise than a whale but I love the fact that it got people talking. It's done its job.