What to say of perfection? 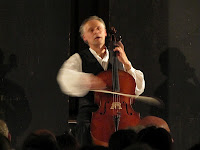 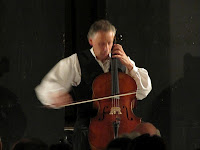 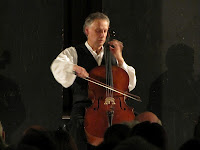 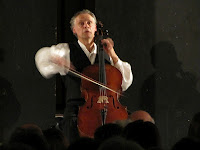 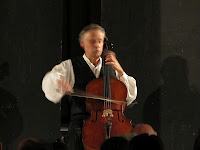 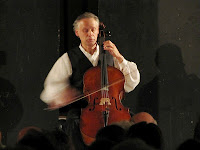 What is there to say about someone like Pieter Wispelway performing Bach cello suites? Just a single guy on stage flanked by a couple of reflective panels. He’s an international recording artist who’s known for these very works. The works themselves are profoundly satisfying. Wispelway must have played them a zillion times. They say he knows them so well that every time is a new interpretation. His skills are easy and immense. From the point of view of a bassist, I could admire his thumb positions and his firm fingers and purposeful and changing hand shape and his intonation and some rabidly quick playing and some nicely purposeful vibrato and his memory. I don’t do bow, but that seemed glorious, so the deep notes powered through and any note could be pure and resonant or biting and edgy. We are watching a master and they make it look easy. I was learning of the structure of these works. He played Bach Cello suites no.4,5,6 in Ebmaj, Cmin and Dmaj. He had earlier played no.1,2,3 at another concert. Each lasted about 30mins. Each was structured with a prelude followed by various dance movements: Allemande, Courante, Sarabande, Bouree 1 & 2 and Gigue. Suffice to say the tunes all become inevitable and the interpretation becomes like conversation when played by someone like this, and like conversation it changes. It’s not that his interpretation was without question. He played with time, played with virtuosity. I‘ll give it to him: I don't really know the works well enough to be distressed. But others didn’t come at his irreverence so easily. On stage, he was short and sweet. He appeared, played one suite, bowed, left the stage, returned, played another… finally bowed, left the stage, returned for an encore of the most famous prelude from No.1 in G major then bowed and left. So it was rather business-like as an entertainer/performer, but brazenly virtuosic as a musician. Great to see a master at work.

Pieter Wispelway (cello) performed the Bach Cello Suites no.4 in Eb major, no.5 in C minor and no.6 in D major at the Albert Hall for the Canberra international Music Festival.
Posted by Eric Pozza at 7:38 pm