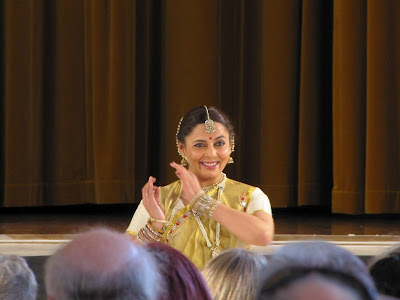 Sharvari Jemenis’ concert of Kathak dance had links to Burley Griffin, was at the Albert Hall and was an event in the Canberra International Music Festival, so it’s relevant. It’s not jazz so I was just a little surprised when a classical person said I’d like it, being a jazz lover. I guess it’s for the improvisation or the rhythms, but it’s still a strange thing to my ears. But I do enjoy the cicada busyness of the tablas and the Ta Ka Di Mi vocalisations of rhythms that inform Indian classical music and the drones and melodies that go with it.

I wasn’t so sure of liking the dance but Sharvari did a great presentation that both informed and entertained. We learnt of the storytelling of much of the dance forms, the symbols and representations of the movements and the musical structures that underlie it all. I thought early on that I wasn’t so keen on religious themes, being wary of dances of Shiva and more, but reprimanded myself as I realised how much I love the expressions of faith of Handel and Bach and Mozart and more. But the dance told wider stories. There was even one of a heroic Queen who refused the British, formed a regiment of female soldiers and was eventually caught and executed by the colonists. We could read the story in her dance movements. Things were becoming understood, becoming interesting, having meaning beyond the arbitrary. The movements of this dance are precise and mannered, but the interaction between dances was anything but. Sharvari talked to the audience, easily and personally, joked with her husband the tabla player before singing a mock interaction with him, and introduced us to the symbology and to the musical structures, singing the 1-2-3-4-5 or 16 or Hindi version of these numbers or the Ta Ki Ta vocalisations that spell out a tune. I’m enamoured by these vocalisations, so this was a winner. As for the music, her husband spelt out those Ta Ki Ta s on the tabla with accompaniment of harmonium and violin as a mix of drones and long ostinato melody and the vocals, all with the twist of the strangely scaled tones of these vocals. There are strange scales here, odd intervals, characteristic bends and portamento, all indicative of this highly evolved music that’s so different to our ears. This was an intriguing and very good-natured musical dance outing.