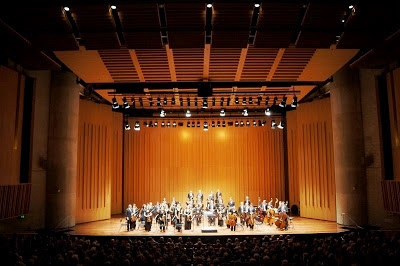 The SSO were in town for C100. Or to put it without acronyms, the Sydney Symphony Orchestra were on a regional tour and visited Canberra for our 100th birthday celebration. Apparently this was their first visit for 10 years. They played at the Llewellyn Hall. I was interested to hear this outfit. James spoke highly of the musicians. I’d only heard the SSO in the Opera House, and that’s big and impersonal and not renowned for its acoustics, but I know Llewellyn and I’ve been hearing the CSO and other orchestras recently, so my ears are more attuned. Also, they were playing another Beethoven symphony and I’m still (in my classical innocence) marking them off. 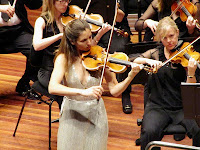 James was right. These guys are very, very good and I’m not at all surprised: they are full time professionals in a standing orchestra; they are performing every few days; Australian musicians are capable and well trained. I sat in three spots for three pieces: two in the dress circle and one in the stalls under the dress circle. I was surprised by how differently it sounded. The orchestra wasn’t large so I thought this was why they sounded tame and thin upstairs, but they were suddenly full and satisfying and comfortably loud under the arch. I also heard the sound as quite unbalanced when I was upstairs: heavy on bass and lacking on higher strings. They played Stravinsky, Brahms and Beethoven. My favourite was Stravinsky’s lively highlights from Pucinella: more modern with more complex and choppy rhythms and a comical segment of bass and trombone. Then Brahm’s Violin concerto Op.77 in D. This was complex, perhaps turgid, quite difficult to follow (not just my observation). I listened for the violin solo that has become the written standard. It’s a strange habit of classical music, that improvisations have become written parts. I was disappointed that I often lost the solo violin when the orchestra entered. I wondered if this was violin volume or a function of the upstairs acoustics. I was just a little uncomfortable with this piece. Then interval and a return with Beethoven’s (Pastoral) Symphony no.6, Op.86 in F major. I was seated downstairs and right from the first notes I could hear comfort and confidence with its simple melodies and evident variations. Not that it was my favourite, but it was beautifully played and an unforced composition. The idyll of the countryside was a favourite theme at that time, all birds and pastures and and thunderstorms. It seemed a pretty easy piece to perform although there were some devastating bass lines in the thunderstorm sequence. Maybe the orchestra just made it look easy. The orchestra (and two extra horns) played on with an encore on Handel's Water music. Who can help but love a fusillade of brass?

So, the program wasn’t immensely challenging but I was mightily impressed by the orchestra. They sounded beautifully together and from the right vantage point they were full sounding and well balanced and their phrases passed easily between players and melded into a lovely whole. I was thinking of how I would express their character, though. They played beautifully and accurately together, but perhaps clinically. Maybe it’s professional musos who play daily and are performing a pretty mainstream program. Maybe it’s the nature of a modern concert hall compared to the ornamented box-like concert halls of Europe. Maybe it’s an Australian take on music with a German character: shared professionalism and skills but different culture. It seemed clinical and correct to my ears but I don’t mean that as a value judgement. I was mightily impressed by the SSO and very glad I attended this concert.