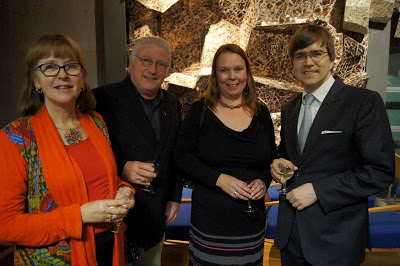 I’d heard Paavali Jumppanen on the Music Show (ABC RN) on Saturday being interviewed by Andrew Ford. I was impressed. Paavali had spent a year at Harvard studying in the Library. He is writing a book on Beethoven and has a musicologist girlfriend and has considered studying musicology or music theory, so he’s well informed. I particularly remember him saying that Beethoven is described as a modern composer writing new styles, but it’s not so clear. He countered that Beethoven’s last sonata was actually written in a style that was old at the time. So he questioned habits of generalisation and stylistic categorisation and specifically whether it’s even possible at this remove to answer some questions about Beethoven. I liked his informed and non-dogmatic stance.

He visited Canberra a few days later to perform at the Finnish Embassy. It’s a fascinating construction, rich in timber and glass and blocky surfaces and leavened with artworks that sprawl over the walls. Performers are introduced by the Ambassador and there’s decent and well-tuned Yamaha grand piano in a room with a bright ambience. I’d heard Paavali in this room once before as well as some visiting jazz players. Paavali played a nicely mixed set: Debussy, Beethoven, Kilpiö and Liszt. The first impression I had was of dynamics and space. Some of his pauses seemed to sit for ages, and while I wasn’t steamrollered by the loud passages, I was impressed by the delicacy of some quiet notes. That fit the winds and the snows and the hills of the Debussy. When you knew the title, you could feel the image that written: slow walking in soft snow or wild winds from the west. The Beethoven Sonata in D major Op.29 “pastoral” was just that - pastoral. More mild, more ordered, classical, with intimations of idyll countryside, except one passage about a minute or two before the end of the fourth movement that surprised me with its harmonic modernity. It seemed out of place to my ears, but fascinating in this context. Then a piece by Lauri Kilpiö called Impromptu transcendental. Paavali read this one. It was masses of notes and swingeing runs. I have no idea how he could have read this chart. Someone was asking afterwards if there’s a division beyond demisemiquaver (there is: hemidemisemiquaver). I’m not sure he needed these, but this was fast, atonal, intense and riddled with notes spread widely over the keyboard. Paavali later told me the composer writes descriptions like “gravelly” and, interestingly, that the notes fall easily under the hand. His hands, maybe. Then Liszt. I expected more virtuoso material but the first three spoke to a romantic, pensive Liszt: Au bord d’une source; La lugubre gondola; Nuages gris. I could picture the grey clouds, but not too sure of the lugubrious gondolas. I just can’t imagine gondolas as lugubrious, although there are some that are larger than the standard, sexy, sprightly model. The final piece was virtuoso Liszt: Mephisto waltzer no.1: expansive, dismissive of difficulty, hands akimbo from low to high notes.

So this was a great pleasure. A capable, informed and interpretive pianist at a unique venue with a quality instrument. I said to Megan I’ll expect playing like that when I come home in the evening, but for some reason she flinched. Paavali Jumppanen (piano) performed at the Finnish Embassy. Thanks to the Finnish Embassy and to Henk van Leeuwen at Australian Northern Europe Liaisons who organised the tour. He brings some great musicians to Australia, and tours some of ours over there.
Posted by Eric Pozza at 4:30 pm